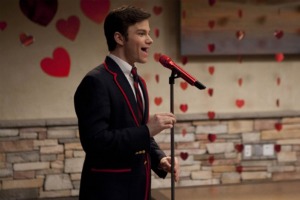 With Valentine’s Day coming in less than a week, Glee aired its Valentine’s Day special on Tuesday.  Although the general idea of this episode was good, it lacked Glee’s unique creativity.

Opening the episode with the song, “Fat Bottom Girls,” Puck serenades Glee Club’s newest member Lauren Zizes.   Although I am normally a fan of Puck’s originality, singing the song “Fat Bottom Girls” to the heavyweight was probably not the best decision when trying to serenade her.

To create even more drama that is unnecessary, Finn starts a kissing booth in which the proceeds go towards the Glee Club.  Rachel, still not over their recent breakup, tries to convince herself that in order to be a successful singer she doesn’t need a man.

I don’t see why she has to convince herself, because it’s obvious that having a boyfriend has nothing to do with one’s ability to sing.   The story-line behind Rachel in this episode was not sympathetic, but pathetic.

I was less than impressed with this episode of Glee.

The show was all over the place. Tina Cohen-Chang was trying to make a desperate attempt to sing to her boyfriend by singing “My Funny Valentine.” The awful attempt was just plain embarrassing and should have been called, “My Desperate Valentine.”

Meanwhile, Quinn was cheating on her boyfriend Sam Evans with Finn.  It seems like no one in the Glee Club is happy, which created a dull mood throughout the entire episode.

The only part I found decent enough to enjoy was when Kurt’s new school, Dalton Academy, sang in public at the Gap Store.

As I still remain a faithful “Gleek,” I must say I am strongly disappointed with this week’s episode.  It’s time for the show to switch up attitudes and restore some love back into Glee Club’s New Directions.