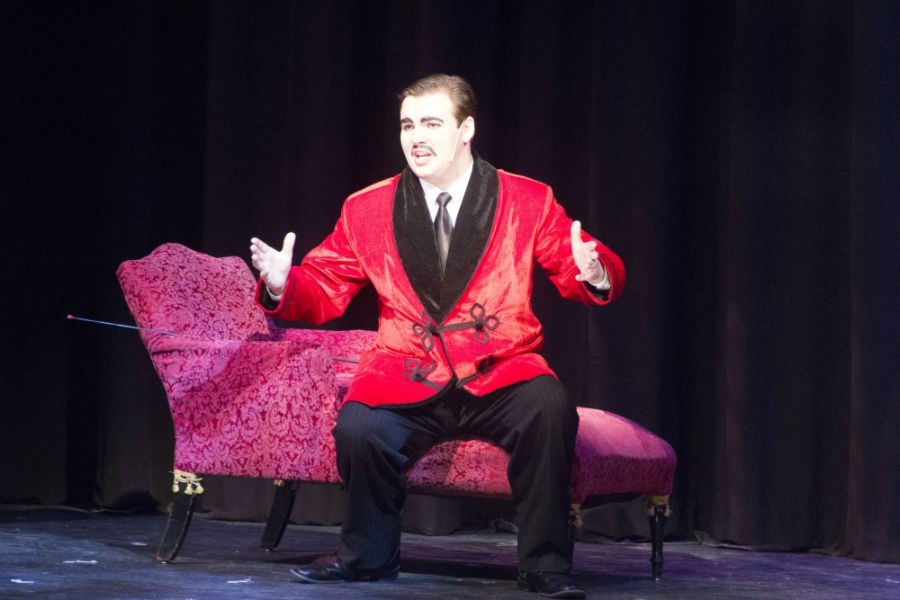 Junior Zach Miller performs as Gomez Addams in the production of "The Addams Family." Miller won a Baltimore Theater Award for Best Performance by a Lead Actor in a Musical for his performance.

On May 1, the JC theatre department received five awards from the Baltimore Theatre Awards in four categories. Junior Zach Miller won an award for Best Actor for his performance as Gomez Addams, while freshman Rachel Miller and senior Victoria Caldwell tied for Best Supporting Actress. “The Addams Family” won Best Musical Overall, and the “Ancestors” who made up the chorus won Best Ensemble.

“We were thrilled [to win] but I was not surprised that we won. Every member of the production staff came through with the utmost perfection on all levels. We called it our perfect storm in a good way,” Director of Theatre Programs Kimberly Brueggemann said.

Senior Victoria Caldwell has been auditioning for a lead role for the past four years, but recieved the role of Alice Beineke in The Addams Family. “It was really exciting [winning], it always feels good to be recognized for all the hard work you put into a show and what made it even better was winning with Rachel, who is also an amazing actress,” Caldwell said.

Rachel is also relatively new to the stage and is following the footsteps of her brother, Zach. Being new hasn’t seemed to slow her down, and she was nominated and received a trophy for her performance as Wednesday Addams. “I honestly didn’t think I’d win. I thought because it was my freshman year that it wasn’t going to happen, I was honored just to be nominated,” Miller said.

One of the real stars behind the scene who was able to make the production flourish was Director and Choreographer Larry Hensley. Hensley commented that he was also beyond proud of Stannard for her final performance but a bit sad on hearing she had not won. “My biggest disappointment was Lilly, she surpassed any lead actress I’ve ever seen, that was unacceptable,” Hensley said. Both Hensley and Bruggemann expressed regret at Stannard’s loss, but are proud of her achievements on the stage.

The Baltimore Theatre Awards are a fairly new awards ceremony, recognizing public and private schools in Maryland for their theatre productions. 12 total member schools were nominated, but only nine schools, including Notre Dame Preparatory School and Catholic High School, amongst others, attended the ceremony.

Bruggemann as well as Caldwell mentioned that the cast worked long hours in order for the play to be as flawless as it was. “Most nights out of the week, we had to stay at school until 9 pm rehearsing. It was worth it because this show was so much fun and clearly paid off,” Caldwell said.

The directors have high hopes for the upcoming productions. “There are always high standards, we have to be able to rise above,” Hensley said.

Azanae Barrow is a Community Editor for The Patriot and jcpatriot.com.