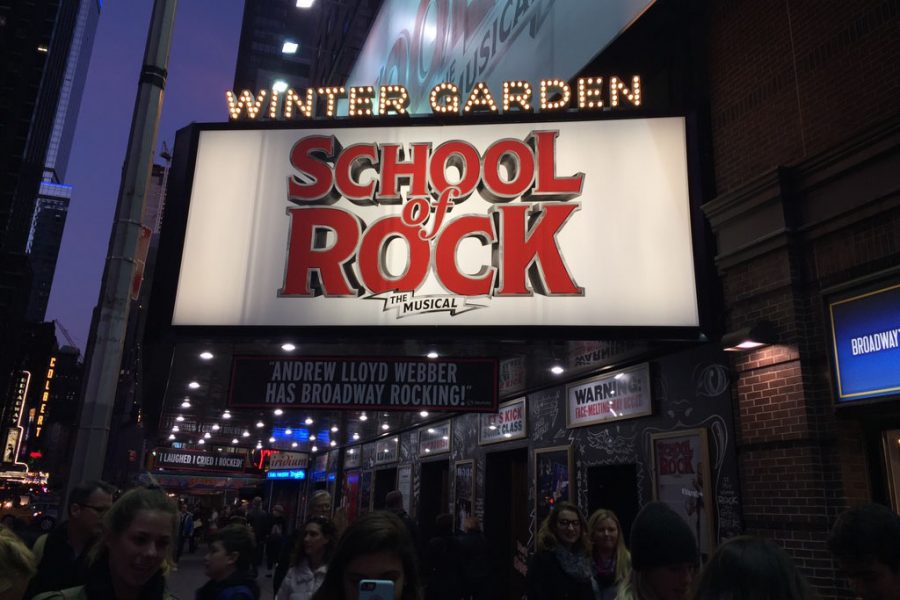 Faculty members Larry Hensely and Kim Brueggemann accompanied a group of students on a trip to New York City on Nov. 12 to see the musical "School of Rock" at the Winter Garden Theatre. The musical was full of great singing and dancing and overall put on a phenomenal performance.

As the background instruments play and the strong, deep sound of the electric guitar fills the theater, the crowd’s attention is immediately drawn to 10-year-old Brandon Niederauer. While he stands in the spotlight on center stage, he perfectly executes his solo for the musical, “School of Rock.”

“School of Rock” was performed at the Winter Garden Theatre in New York City on Nov. 12 and put on a fantastic showing of the musical. The cast had already performed several performances before Nov. 12 and will have more showings in December through May.

Niederauer played the role of Zack, who spent the majority of the play rocking out on his electric guitar. Before the show started, there was a  voice that came through the speakers informing the audience that all the kids using instruments were actually playing. If the announcer did not tell the audience this, I would have thought the children were acting and not genuinely playing their instruments. There were four main kids playing instruments on stage and to the audience, they played with such ease that it became clear on why they made an announcement before the show.

The character Katie was performed by Rachel Katzke, a bass player. The deep sound of her guitar gave me chills as she effortlessly strummed the strings of her instrument. She was only 10 years old, but she was still able to hold the guitar and play like a professional.

The score was absolutely phenomenal. All of the instruments together sounded so authentic and crisp that it helped to build up the atmosphere of the crowd. There were no sound effects and all of the instruments were amplified to help create more intensity in the crowd. During the closing scene, it felt as if I was at a concert because of the loud music and flashing lights everywhere.

The acting was sensational and gave the audience a piece of the Broadway talent that is found all over New York City.

The main role of Dewey Finn was played by Will Blum. Blum’s performance and talent was amazing, and he didn’t seem to be phased by the adolescents he was surrounded by for the majority of the play. He was able to perform flawlessly even though all of his co-actors were much younger and had less experience than him.

Besides the music in the show, the most impressive element was the vocals. The majority of the characters and ensemble were children, but that didn’t stop them from putting on a mature and strong show. As a group, their singing sounded excellent, but as individuals, they had some of the strongest voices I have ever heard. The character Tomika, played by Bobbi Mackenzie, had such a strong and beautiful solo that everytime she sang the crowd would explode with emotion in awe of her stellar performance.

The musical was identical to the movie that starred Jack Black and excellently executed all of the scenes. The scene in the movie that showcases Tomika’s talent for the audience was a powerful piece in the movie, and it was just as powerful on stage at the Winter Garden Theatre. When she broke out into song, the crowd was screaming and applauding at her jaw-dropping performance.

The show was much better than the movie itself because it was able to capture and involve the audience more thoroughly than the movie ever could have. Watching the actors perform live was such an exciting, thrilling experience.

One element of the show that stood out to me was the quick and efficient set changes. Each scene seemed to have a new piece added in and they came from all over the stage. There were pieces coming up from beneath the stage, lowered down from above, and rolling in from both sides.

Overall the musical was one of the best I have ever seen and kept me amazed and impressed for the whole length of the show. The cast and crew did a flawless job and had a fantastic performance that pleased the audiences leaving all of them, including myself, in awe.