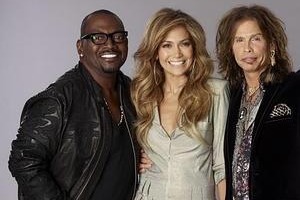 After eight months of sheer anticipation, season 10 of the world’s number one viewed reality show is finally here.

Yes, American Idol returns, but this time with new judges.

For the first seven seasons of American Idol, viewers turned on their televisions every Wednesday and Thursday evening to the show’s famous three judges Randy Jackson, Paula Abdul, and Simon Cowell.  These three judges made the show rise in ratings throughout the years.

As a devoted viewer of American Idol, I found this line-up of judges to be the best part of the show.  Each judge brought a different opinion and aspect in critiquing the Idol contestants.

These three judges had formed a special bond between the show and its viewers throughout the years, and they were probably the cause of such high ratings.  By the 8th and 9th season, ratings dropped when new judges Kara Diogaurdi and Ellen DeGeneres replaced Paula on the show.  I still watched the show, but without the three original judges up there, the show had lost its comical touch.

It was when I heard that Simon Cowell was leaving the show that my heart dropped.  I had tuned in every week to watch him reveal his high criticism towards the contestants.  Season 10 started a new panel of judges, giving Ellen and Kara the boot.

Replacing Kara, Ellen, and Simon are Jennifer Lopez and Steven Tyler.  In my opinion, American Idol made a big mistake.  Now the “top dog” is Randy Jackson, the only original judge from season one.  Is the show going to let his “dog-house” take over?

After watching the season premiere a few weeks ago, I simply lost interest.  The show no longer has that same appeal to me.  I’ve seen the seasons with Kelly Clarkson, Carrie Underwood, and Kris Allen, and not once did I doubt the show’s ability to bring back a new season filled with high hopes until now.

The three judges of season 10 all agree with each other. On everything. If one person doesn’t like someone, none of them do, giving that idol-wannabe no chances in having their dream come true.  If one judge likes a contestant, then they all do, even if that person sounds worse than a tone-deaf whale.

All that the judges seem to care about is how good of a background story the contestant has.  American Idol is losing its musical touch and becoming more of a sympathy show.  The selection of judges has no variation and simply will ruin the show’s ratings once and for all.

If I were a judge, American Idol wouldn’t make the final cut to Hollywood.

Megan Battaglia is the Multimedia Editor for “The Patriot” and jcpatriot.com