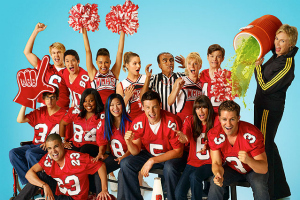 While many people anxiously awaited Super Bowl XLV, I sat with my friends waiting for the new episode of Glee to premiere.

Throughout the past week, FOX network had created hype about the upcoming Glee episode, and the show did not disappoint.

The episode took off with McKinley High’s football team making the state championships.  I felt that the story line of the episode fell perfectly in line with Super Bowl Sunday. Captain of the football team, Finn Hudson, leads the team to victory, but is sick of the constant bullying from the football team towards the Glee Club.

Stepping in to fix the problem, Mr. Schuester and Coach Beiste have the football team join the glee club in the championship halftime show.

The answer to this problem was by far the most creative thing the Glee Club has yet to come up with.  They had the Glee Club and football players do a mashup of Michael Jackson’s “Thriller” and the Yeah Yeah Yeah’s “Heads will Roll. “

Not only were the choreography and costumes brilliant, but the way the song brought them closer together was stunning.  Maybe JC would have more spirit if we were like McKinley High. I would pay to see that go on at our football games.

Of course, the conniving Sue Sylvester was out to strike the Glee Club again by scheduling a cheerleading competition on the same day as the football championship game.  This re-schedule caused glee club members, Quinn Fabray, Brittany Pierce, and Santana Lopez to choose between popularity and their friends.

With Sue, hoping for Brittany to be shot from a live canon to bring excitement to the cheerleading routine, it wasn’t a tough choice for the cheerleaders to choose Glee over cheerleading.  To that, I am not surprised.  The thought of being shot a hundred feet into the air and having a 70 percent chance of dying is not very appealing.

With the second part of season two’s premiere episode coming to an end, I was not one bit disappointed with the presentation of this episode.  It was a great kick off to the show, and this “Gleek” is ready for Tuesday’s Valentine’s Day special.

Megan Battaglia is a Multimedia Editor for “The Patriot” and jcpatriot.com