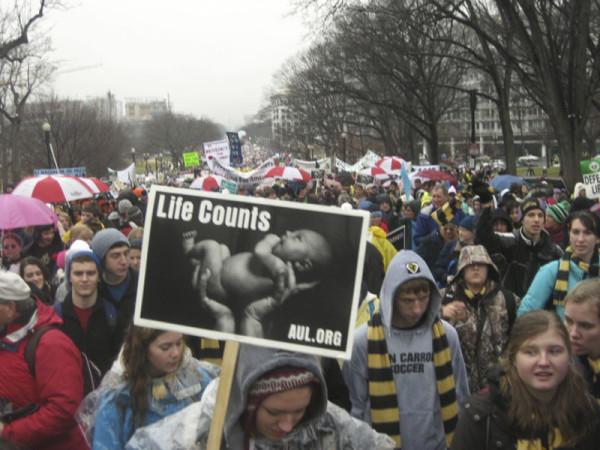 On a Monday morning, no one wants to get up for their alarm, certainly not to stand in the rain. However, on Jan. 23, I forced myself to wake up at 3:50 a.m. because I would be marching for those who would never even get the chance to experience rain.

I still wasn’t too happy to be facing the rain, until the March for Life buses arrived at the Verizon Center. I looked out the window to see floods of teenagers from schools as close as the District of Columbia to as far as Sydney, Australia. Entering the Verizon Center, I was surprised to see it was completely packed.

As the crowds grew bigger, I was becoming a little nervous about my previous offer to usher during Mass, until I traveled backstage.  I was then given simple instruction on the proper procedure for communion.

When the mass started, more priests than I could’ve ever imagined seeing at one time began to process in. A sea of white enveloped the floor. With the introduction of the bishops, cheers began to echo around the arena as each school supported the representative from their district.

Monsignor Charles Pope, from the District of Columbia, presided over the Mass.  His homily allowed the audience to remember that they were “fearfully and wonderfully made” in the image of God.

The monsignor then asked us to reflect on chastity, charity, courage, and constancy. Charity offered a word of encouragement, prompting the audience to get involved and assist crisis pregnant centers because “we can’t just say no to abortions, we have to help people say no.”

His point on courage educated me on prenatal diagnosis, and I now believe that though a child may be facing a serious illness like Down’s syndrome, they should not be denied an opportunity for life. Constancy gave me hope because “61 percent of Americans now think abortion should be illegal most, if not all the time,” Pope said, and that little sliver of progress gave me the urge to keep walking for the March.

I needed that energy when my classmates and I began to head for the streets and put our words into action. We marched on the Mall, where there were speakers empowering others with their love of life and referencing such evils as genocide and euthanasia, as well as abortion.

I was overwhelmed by the amount of people spread out in all directions. The magnitude of the crowd was absolutely unbelievable. Even in the pouring rain, this was what I had come for, to see all these people with a love for life.

The number of people attending the March seemed to embody what the March was about.  Everyone attending demonstrated that abortion, genocide, and other such evils were not okay and that we wanted to see a change. When that moment clicked, I was glad that I had decided to acknowledge my alarm that morning.

Sarah Kearby is a Lifestyles Editor for The Patriot and jcpatriot.com.