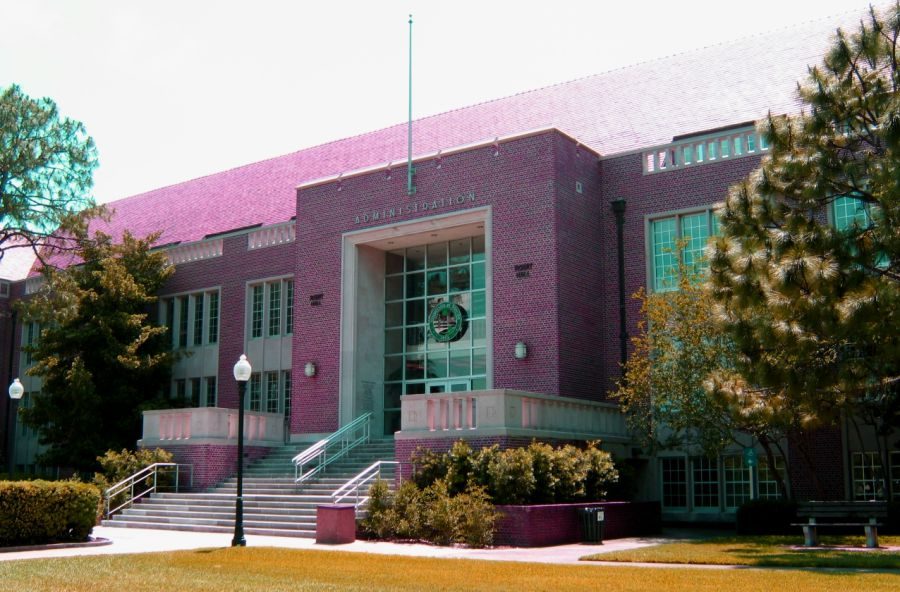 Tigert Hall is one of the many buildings found at Florida University. This hall houses the Admissions Department.

Correction: The earlier version of this story included a picture of the incorrect university. The incorrect picture has been replaced.

The University of Florida is located in on a 2,000-acre campus in the quirky town of Gainesville, Fl. It is a four-year public university in a small city with a suburban setting. UF is considered a large university, with 35,043 total undergraduates. 7,192 of these students are degree-seeking freshmen. They boast that they are one of the happiest campuses nationwide, backed by the fact that 96 percent of freshmen return for their sophomore year.

The campus is pretty, and the temperature is perfect. My favorite building was the building for business majors. It was newly renovated and quite modern. Sadly, most of the other buildings looked like JC classrooms that hadn’t been cleaned in weeks.

They recently updated their student union, and it turned out rather nicely. There are lots of places to lounge and talk with friends. The top level of the union is a hotel for families to stay in when they visit. The union also overlooks a cute little pond. I saw lots of students grabbing food inside at the food court and taking it outside to eat on the grass in front of the pond.

Albert the Gator is the mascot, and he can frequently be seen walking around campus. I got a picture with him while I visited UF. The football stadium is quite large and impressive. Their football team team is a part of the SEC, the undisputed best conference in the nation. Florida State University is one of their biggest rivals. Numerous alumni have gone on to play in the NFL.

Food and other things to do:

The cafeteria I went to was amazing. There were so many food options, and all of them looked delicious. They had something for everyone, whether you wanted healthy food or super greasy burgers and fries. The menu changes frequently, but the staples, such as pizza, will always be there.

The town of Gainesville has lots of things to do after dark, but in the day one notices that most of the town’s buildings are abandoned. There seems to be more buildings being sold than actually used. I’m not sure I would want to be walking around there at night. On a side note, there were some pretty murals of mermaids on the building walls.

On the bright side, I went to an amazing local pizza shop and got some of the most amazing pizza I have ever tried in my life. Satchel’s Pizza not only has the best pizza on the east coast, but it is also the most unique and lovable place you’ll ever go to. From the trash-art fountain, to the quaint interior, to the funky bands they have playing all the time, there was clearly a reason why numerous tour guides recommended Satchel’s to us. I ate my deep-dish pizza while sitting inside an old Volkswagen van. They had gutted out the interior of the van and put two little tables inside instead.

88 percent of UF students graduate in four years. There’s a 39 percent acceptance rate. The education seems sound, but it’s clearly an education from a larger university. There are lots of teaching assistants and online courses, particularly in liberal arts courses.

The honors college doesn’t seem impressive and is still in progress. It doesn’t compare to the honors college other prominent schools like Florida State University and others, which are united and appear to provide lots of support, attention, and opportunities to students. The students I talked to who were a part of UF’s honors college were less than enthused.

Every student met was happy at the UF, but I don’t understand why. It seems like a decent college on the whole, but compared to other places, it fell short. It was a college that has been around for ages, yet it seems like it’s still in progress. People seemed to be moving out from the town around it and many of the academic programs appeared to be in transition. Despite the amazing time I had at Satchel’s Pizza, the university itself was lacking experiential prowess.

Kelly Foulk is a News Editor for The Patriot and jcpatriot.com.