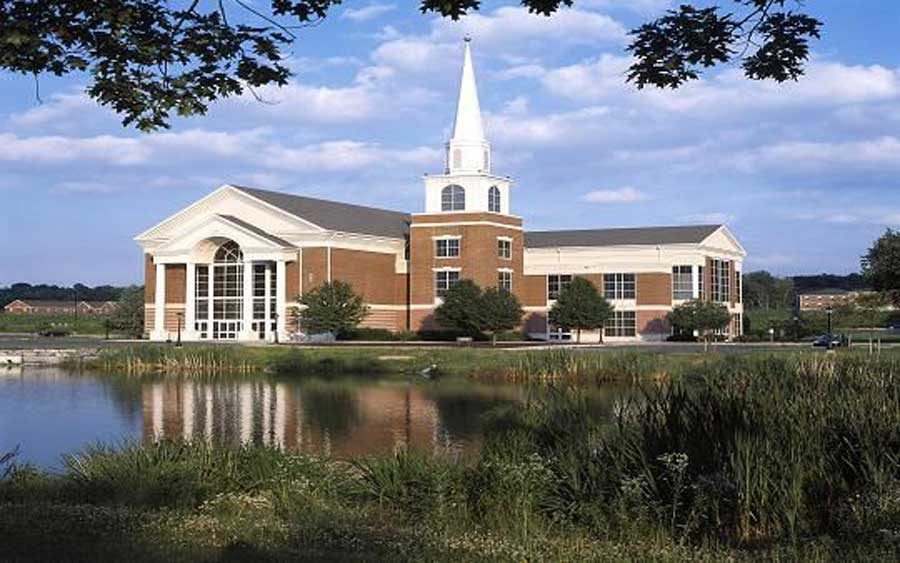 Opening in 1995, Leffler Chapel and Performance Center served many events as well services such as weddings.

Campus: Elizabethtown does not boast a large, flashy, campus like most schools. Instead, the campus at Etown is quaint, quiet, and fairly small (203 acres). Located in Elizabethtown, PA,  it is a quick drive from Harrisburg, the capital of Pennsylvania, as well as Hershey, where the famous Hershey Park is located, too. The commute from home isn’t bad either, only an hour and a half drive from Bel Air.  According to our tour guide, it takes only five minutes to drive from one end of the campus to the other, and it didn’t take much more time to walk across it either. The gym was located across from three classroom buildings, and just down the hill were dorms.

Athletics: The Blue Jays have 22 Division III athletic teams, with the most popular being men’s and women’s soccer and lacrosse, according to the tour guide. They compete in the Landmark Conference.

I visited for basketball and was very encouraged after I left. I felt a personal connection with the coach, as we had a nice 45-minute conversation one on one. It made me feel more important, and more valued. Although, the men’s basketball team had a down year this past year, going 3-21, they have been competitive nationally and in the Landmark Conference, and came in second place in the 2002 Division III Men’s National Championship.

One cool tradition our tour guide explained was the “Marshmallow Bowl,” the rivalry game in men’s soccer between Etown and Messiah College. Fans of both teams load up on bags of marshmallows and proceed to pelt players, coaches, and even referees with marshmallows from the sidelines. People were even talking about the Marshmallow Bowl at Messiah the following week.

Food and other things to do:

The food in the cafeteria was quality, but it was nothing different than what you would find at most colleges. There is even a little store, basically like a Wawa, that had lots of little snacks and even a few meals.

Academics: Founded in 1899, Elizabethtown has 1,800 students and has a 66 percent acceptance rate. Etown has 17 academic departments, 45 undergraduate majors, over 100 minors and concentrations, and 25 cooperative programs with other institutions.

Elizabethtown is nationally recognized for its academics. In the U.S. News & World Report’s “Best Colleges in the Northeast,” Etown received first in commitment to teaching, fourth overall among baccalaureate colleges, and the best value in the region. The tour guide, who was an education major, said she came to Etown because 100 percent of their education majors are placed in jobs right out of college. I sat through the business program’s presentations, and they had current students talk about all the things they had done within the programs. They received internships either in the summer or during a semester and had even studied abroad with an internship, and sometimes, even a job. The business department is quite impressive.

Summary: Etown is a quality, small, liberal arts college. It has a safe environment along with a beautiful, unique campus. I visited for basketball and was very encouraged after I left. I felt a personal connection with the coach, as we had a nice 45-minute conversation one on one. It made me feel more important, and more valued.

If you aren’t interested in attending a large university with 30,000 or 40,000 plus people, I highly suggest looking into Etown.