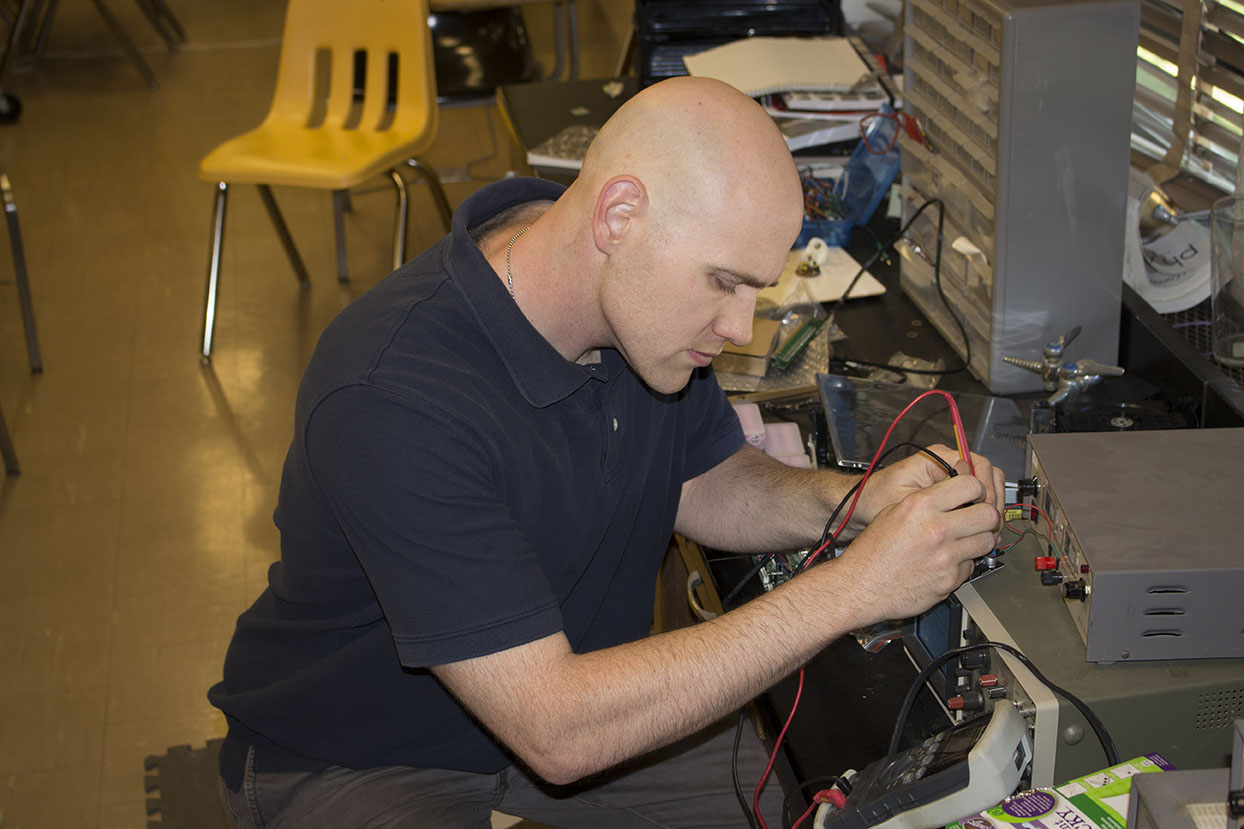 Physics teacher Anthony Davidson focuses as he tests computer equipment for a freshman building a gaming computer. This is Davidson's second year at JC, and he enjoys helping students in class as well as with their personal endeavors.

With sweaty palms and weak knees, physics teacher Anthony Davidson walks across the stage to receive his Ph.D. in 2015. Excitement flows through him, and he realizes that 10 years of challenges were all worth it. The lights are shining bright, and as he looks into the crowd, he hopes and prays that he does not trip. As his faculty advisor pulls the hood over his head as part of the Hooding Ceremony, a tradition amongst graduate schools which honors receiving the highest form of education, Davidson realizes how far he has come over his years of research.

Davidson’s path to getting his Ph.D. was not always clear. As an undergrad, he faced many changes including changing his major. Davidson originally hoped to study Aerospace Engineering, but switched majors to physics after realizing Towson University did not have the program he wanted.

“When I went to Towson, their program wasn’t formulated right because it would have taken me six years to get two bachelor’s degrees, and I decided to switch to physics because, at the time, I was really good at it,“ Davidson said.

During his time as an undergrad, Davidson decided to become a teacher because he often explained physics to his friends in college and realized that he enjoyed when they understood it. “Back in college when I was an undergrad and would hang out in the physics lounge, I would usually be the one teaching, and I realized I enjoyed watching my fellow students get it and [I enjoyed] actually being up and presenting,” he said.

Davidson’s love for physics and learning encouraged him to pursue his doctorate, which took him a total of 10 years. To reach his goal and earn his doctorate, he worked at the Naval Research Lab in Washington, D.C. and did various tasks related to his research.

“Since we were heating materials that would deposit elsewhere, the system had to be cleaned every once in awhile, so a big part of my job was taking it apart, cleaning it, and putting it back together,” Davidson said. “Another big thing I had to do was update the programming, so I did a lot of programming for the experiments.”

All of his experiments culminated in a 110 page paper which he presented to a panel of 12 to 15 experts to determine whether or not he would receive his doctorate. Davidson had to defend his research, and after an hour, he was given approval or rejection.

The approval he received allowed him the option to become a college professor, which Davidson originally planned to do before coming to JC. “Part of it was that, initially, I wanted to teach at the college level, and you need a doctorate to do that,” he said.

Besides these planned events, Davidson also enjoys interacting with students and helping them through rough times. “Earlier today I was out in the courtyard and a student was going through emotional problems because they just recently went through a breakup, but I was able to give them advice that made them feel a little better, so that’s what I like about being a teacher here,” Davidson said.

Davidson’s love for learning extends outside of the classroom as well. He is currently attempting to learn the guitar and is starting a garden. “I’ve been working on trying to play guitar, but lately I haven’t done much because one of my students needs [the guitar] for a physics project,” Davison said.

Although his plans changed throughout his undergraduate and graduate school years, Davidson is happy with where these changes have taken him. From his own experiences and changes in college, Davidson warns seniors not to mess up and get behind within the first months of college. “Don’t mess up the first couple months, because you get a lot of freedom really quickly and sometimes you can fall behind really quickly,” Davidson said. “The professor is there to teach you the information, but it is up to you to absorb it as quickly as possible.”

Lauren Becker and Elizabeth Harmison are News Editors for The Patriot and jcpatriot.com.