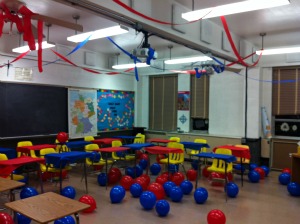 The last thing German teacher Ashleigh Stall expected when she entered her room was to find 144 red and blue balloons and streamers.  The blue represe­­­­­­nted Xavier, Stall’s college, while the red represented its rival university, Dayton.

The anonymous prank was pulled by Music Department Chair Marc Bolden and six members of the pep band on Thursday, Feb. 16.

The story, according to both Stall and Bolden, began during the March for Life event on Jan. 23 that they both attended.

“When we were both at the March for Life and as the kids were gathered in the Verizon center, I noticed [Stall] was wearing the Xavier hoodie.  Then we talked about the game that happened the Saturday before March for Life and [I] found out that she was into basketball too. I knew that from that moment on, it was on like Donkey Kong,” Bolden said.

According to Bolden, the idea to decorate Stall’s room came shortly after the March for Life.  Dayton and Xavier are both in the same sports conference and he knew when they would face off again.

“I kept thinking about what could be a funny prank that wouldn’t be destructive or harmful but would be in good spirits.  I thought about getting a basketball piñata filled with glitter, [but] as another teacher I know what’s funny and what’s not.  I just started looking around online at partycity.com where I got the goods,” Bolden said.

“After class, I saw a sign posting the score [of the first game with] Dayton winning and Xavier losing.  Mr. Bolden had come and posted that anonymously for me to see later,” Stall said.  “Last Friday, I got to school and my door was covered in blue paper with pictures of the Dayton and Xavier mascots.”

“I got a chuckle out of it . . . everywhere there were blue and red streamers from the ceiling, 144 red balloons all over the floor and tables, and on half of my desks there were red and blue table cloths taped individually to the desk,” Stall said.  “I had German One in the morning and they had a lot of fun playing with balloons.”

“It was fun.  I got the initial surprise reaction which was what I was going for.  At this moment, Xavier beat Dayton in overtime, so I’m slowly waiting for a rebuttal,” Bolden said.

“It’s good-natured fun.  I appreciate a good joke and it gave me an excuse to go down and talk to Mr. Bolden and get to know him one on one,” Stall said.

As for future feuds, the respective advisories of both Bolden and Stall are currently thinking of advisory challenges for each other.

“[This prank was] definitely not the last.  Anytime there’s a Dayton [versus] Xavier game, at least one of us will do something.  I think this is a little friendly feud that will continue,” Bolden said.