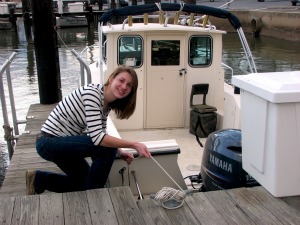 Instead of taking the easy way out and getting my boating certification online, I took an eight hour class and learned how to boat safely and properly.

Even though eight hours was a long time to be in the classroom, I learned a lot. Being an extremely inexperienced boater, with only previous experience steering a canoe or paddling in a kayak, the class really opened my eyes to the rules of the water.

First I learned the basics, such as right being the starboard side of the boat and left being the port side.  I also learned that personal watercraft such a Jet Skis or ski doos are considered inboard vessels less than 16 feet in length by the Coast Guard.

It is also important that you always let someone reliable on land know when and where you are boating.

After mastering the basics, I began learning more important things such as who has the right-of-way in the water, which is definitely more complicated than driving. It depends on which direction all the boats are going, but it’s something I probably would have never mastered from a couple questions on an online quiz.

You also learn a lot about the navigation lights you are required to have onboard the ship at night, such as red and green sidelights and an all-round white light. These lights need to be understood if you are boating at night because you have to know how to travel around the other boats on the waterway.

I also learned how to tightly tie up a boat, not just twisting a rope around the cleat or metal fitting found on the dock.

I found out how to find a life vest that fit me just right. These things could never have been discovered through a computer screen.

The bonus of having an instructor with previous experience in the Coast Guard and lots of firsthand knowledge of being a boater himself was absolutely invaluable. We heard numerous stories throughout the class from mistakes he had seen on the water and lots of little tips that would not have been found in a book or online course.

My instructor’s stories about his adventures on the water made me dream of my own future endeavors.

Until I finally get a boat of my own, I’ll just paddle around the waterways with my waterproof certification card and be fully educated about the rules of the water.

Sarah Kearby is a Lifestyles Editor for The Patriot and jcpatriot.com.