Rivalry continues between Bolden and Stall 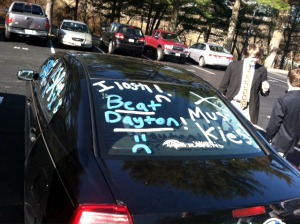 The war was simmering down until music department teacher Marc Bolden found his car covered in window paint on March 8.  In reality, the war was just beginning.

The advisory war between Bolden and Stall started when the teachers realized their colleges are arch enemies.  Bolden went to University of Dayton and Stall went to Xavier University.

Bolden was in good spirits about the car prank.  “The prank was awesome. I laughed when I saw it,” he said.

Following this prank, Bolden decorated Stall’s classroom with red and blue streamers, tablecloths, and post-it notes with the help of some music students. A sign was also placed in front of her parking spot saying “Dayton fan only parking.”

Stall was amused with the pranks. “My initial reaction to the second round of pranks was definitely a good laugh. His pranks are creative and he goes all out. My second reaction was surprised, and I was definitely impressed. I don’t know where he gets the time, the resources, and the student helpers to pull such extensive stunts,” Stall said.

Bolden and his advisory don’t plan to stop there.  Although Xavier won the game against Dayton this year, the war will still continue. “The war won’t end until one of us leaves the school.  It’s still on like Donkey Kong,” Bolden said.

Bolden’s advisory is also excited to continue the war. “We won the rock paper scissors tournament and we aren’t stopping there,” senior Sara Turks said.

Even though the advisories are still competing against each other, the true war between Xavier and Dayton has slowed for the year. “It’s died down for this year, but I’m sure it’ll rev up again next year. I have bragging rights since Xavier won this year,” Stall said.

“[Bolden] is very dedicated to his cause and support of the Dayton Flyers. Too bad it doesn’t transfer to them on the basketball court,” Stall said.