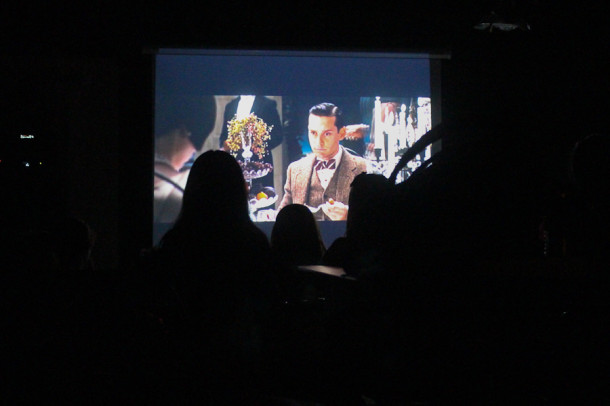 Film club members watch "The Great Gatsby" at the first Film club meeting. The Film club shows and makes films throughout the year.

According to club moderator and TV Production teacher Robert Schick, this phrase sums up what Film Club is all about: fun films with friends.

“I want to get people to see and enjoy movies they wouldn’t see otherwise,” Schick said.

Another aspect of the Film Club is that they also make and produce their own films. According to Schick, club members get to participate in the filmmaking process by working as the cast and crew. Schick wants the club to enter a few film festivals this year, which is something senior and president of Film Club Dan Henstchel knows a lot about.

Henstchel enjoys both making and watching films. Two of his films have been shown at the Charles Theater in Baltimore. According to Schick, it is usually Henstchel’s job to pick the movies that the club will show in the TV Production Studio.

“[Henstchel] has a good gauge of what [movies] students will like,” Schick said. On Sept. 20, the club showed “The Great Gatsby.”

According to Schick, about 15 people came to watch the movie, which he thought was a good turnout for the club’s first showing.

For the next event, Schick and Henstchel want to show a Halloween-themed film.

Movie discussion and analysis depend on the turn out of the more popular movies, according to Henstchel. Once attendance of their events grows, Henstchel wants to start showing more interesting movies which, according to Schick, can spark good, fun analysis.