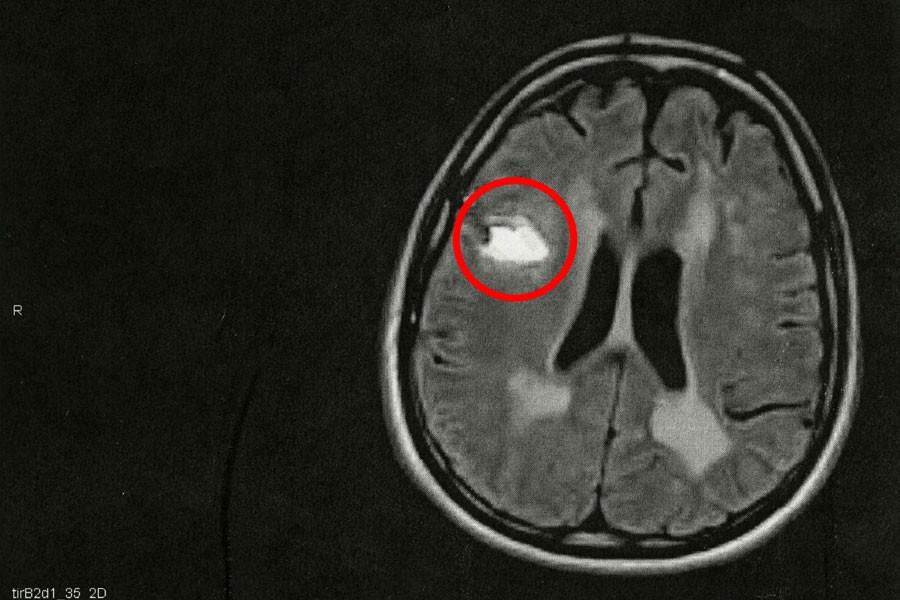 A white spot on this MRI scan, enclosed in the red circle, indicates that this patient is a stroke victim. Senior Annalee Gabler worked with MRI and CT scans of stroke victims in her internship at the Neurology Ward of St. Agnes Hospital for her Senior Project.

Senior Annalee Gabler sits with Dr. Marion Lamonte, Head of Neurology for St. Agnes Hospital in Baltimore. The two don similar lab coats and stethoscopes while reviewing patient files. Suddenly, a code blue is announced on the loudspeaker, signalling that a patient is in cardiac arrest and is in need of immediate medical attention.

Gabler and Lamonte run toward the floor number that is being blasted throughout the ward. They reach the floor, but it’s eerily quiet. Doctors are scattered, all wondering who called the code.

“A woman popped out of her room – completely alive – and says, ‘it was me,’” Gabler said.

According to Gabler, the woman had just been transferred from the Psychiatry Ward due to migraines. While Gabler never found out the reason the woman called a code blue on herself, Gabler believes it was just a delusion.

“I was kind of exasperated because it was a whole big commotion for nothing, but I couldn’t help but chuckle at the insanity of it,” Gabler said.

Gabler interned with Lamonte and Dr. Catherine Griffin, another doctor in the Neurology Ward at St. Agnes, for her Senior Project. She visited the hospital on one weekend in October and another in January, sometimes pulling 10-hour shifts in order to learn as much as possible.

Gabler also pursued this Senior Project to help her decide if neurology was the right field of medicine for her. Gabler always wanted to be a doctor, but didn’t decide on neurology until recently.

“I’m fascinated by the brain,” Gabler said. “[Also,] the people who end up in the Neurology Ward are very sick and I [want] to help them.”

According to Senior Project Coordinator Louise Gezcy, Gabler is passionate about her Senior Project, which helped her to have a positive experience with the internships.

“Senior Projects are so much more successful and so much more fulfilling if students are excited about what they’re doing,” Gezcy said. “Her passion for her project is what I’m always hoping all seniors will have for their projects.”

Gabler worked with Lamonte and Griffin over a four-day period. She spent a weekend with Lamonte in October and another with Griffin earlier in January.

For Lamonte, Gabler was primarily responsible for conducting pre-exam consultations. She had to record each patient’s physical characteristics, medications, and medical history. She also performed a visual field exam and drift test to test for any neurological deficiencies.

Then Gabler sat in on the exam with Lamonte. After the exam, Lamonte would give her a little quiz on details from the exam.

“She seemed impressed with my abilities to deduce things,” Gabler said.

With Griffin, Gabler only sat in on the exams. However, Griffin’s mini-quizzes occurred during the exam, not after it.

“I had to be on top of my game [with Griffin.] She was more serious,” Gabler said. “Lamonte was much more happy-go-lucky.”

Gabler also had to do some research for her internship. She organized files, looked at MRI scans, and found CHADVAS scores.

“CHADVAS scores are for hypertensive patients. [It tells] how likely they are to have a stroke,” Gabler said. “I actually have an app for it because I did it so many times.”

Gabler is grateful for the opportunity her Senior Project gave her. “I felt that learning from successful doctors was the best way to learn about neurology and see what it’s like to be a doctor and interact with patients,” Gabler said.

After working with Lamonte and Griffin, Gabler decided that she will pursue neurology.

“[I saw the] people and what they go through, and how much neurologists help,” Gabler said. “I thrived on the chaos in a hospital.”

Angela DeCarlo is the Stories Chief for The Patriot and jcpatriot.com.