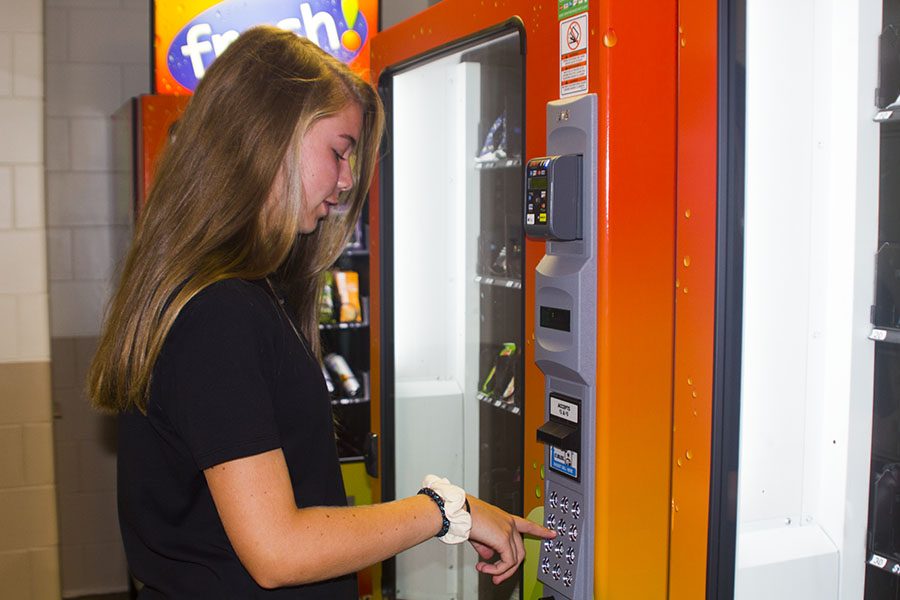 Freshman Ellie Bruggeman stops for a snack at the new healthy vending machines. The machines were installed over the summer in an effort to promote healthy snacking.

When the school year began, students discovered new vending machines in the cafeteria touted to be healthier than the previous options. They noticed that there were no more Doritos, candy bars, or bottles of soda. Instead, the new machines offer such options as energy bars, apple crisps, and sparkling juices. Prices have increased slightly with the change, rising by approximately 50 cents per purchase.

Last year, there were several options that could be bought for 75 cents, a majority of which were potato chips. Most snacks could be bought with $1.25 or less. The cheapest option in the new vending machines is $1, and prices tend to hover around $1.50.  Many of the components of the healthier machines cost $2, and a few even ask students to shell out $3 for a bit of food.

Students are willing to overlook the increase in price in exchange for higher quality. “[The price] is worth it! I love the chocolate milk!” senior Charlotte Haggerty said.

The change to healthy vending machines could be due in part to a nationwide trend for natural ingredients. The “Maryland Healthy Vending Act,” for example, was proposed earlier in the year. If it was passed, it would have required 75 percent of vending machine options to meet predetermined healthy standards.

The change to healthy vending machines from Fresh Fit Vending left some students, such as sophomore Benjamin Pika, concerned at first. “I could use a honey bun once in awhile,” Pika said. However, Pika later concluded that the change was a positive one. He said that he now uses the vending machines more often than last year because “there are better options.”

Though the students miss the familiar brands from last year, most seem open to trying out the new snack options.  “I liked the other ones, but these have a variety of different things that are healthy but still delicious,” junior Ashley Schwartz said.

According to Steve Henneman, co-owner of Fresh Fit Vending, “The goal of our company is to make healthier snack and drink options more available to students and faculty.” Henneman explained that the company has been “very successful in starting a nationwide movement towards better-for-you vending machine options.”

The Facebook page for Fresh Fit Vending cites McDonogh School and the Maryland School of Ballet and Modern Dance as other places where healthy vending machines have been implemented into educational settings during this year alone. The vending machines are also available in Harford Mall in Bel Air and the Veronica “Roni” Chenowith Activity Center in Fallston.

The new snack additions are consistent with Henneman’s claims of being higher in nutritional value. They tend to have fewer calories, sugars, total fat levels, and saturated fat levels compared to the options that were available last year. Many of the new vending machine selections also have lower sodium contents and total carbohydrates as well.

Students are now exposed to more natural ingredients found in the components of the new machines. Several of the products are non-GMO, gluten-free, kosher, vegetarian, and/or non-artificial. This appeals to a wider audience who may be on strict diets, or who may have allergy restrictions.

Junior Haley Ferguson, for example, has celiac disease, otherwise known as gluten-intolerance, meaning that she cannot enjoy many of the foods that are typically options in vending machines, as they contain gluten. “When I was diagnosed, in the beginning, it was very difficult. All of the sudden not being able to eat almost all the foods I was used to eating was very difficult,” Ferguson said. Though she has bought food from the vending machines in the past, she admits that “there was definitely some stuff I couldn’t have in there.”

Ferguson believes that the school could make more of an effort to appeal to all sorts of dietary needs, although the new vending machines show signs of improvement.

Ianna Pirozzi is an In-Focus Editor and Allie Taylor is a Perspectives Editor for The Patriot and jcpatriot.com.