The Patriot In-Depth: why I teach

The Patriot interviewed five teachers about why they became educators and what they enjoy most about teaching. Their responses illustrate a variety of career paths and motivations. These stories outline their journeys to JC.

George Appleby challenges students to do their best 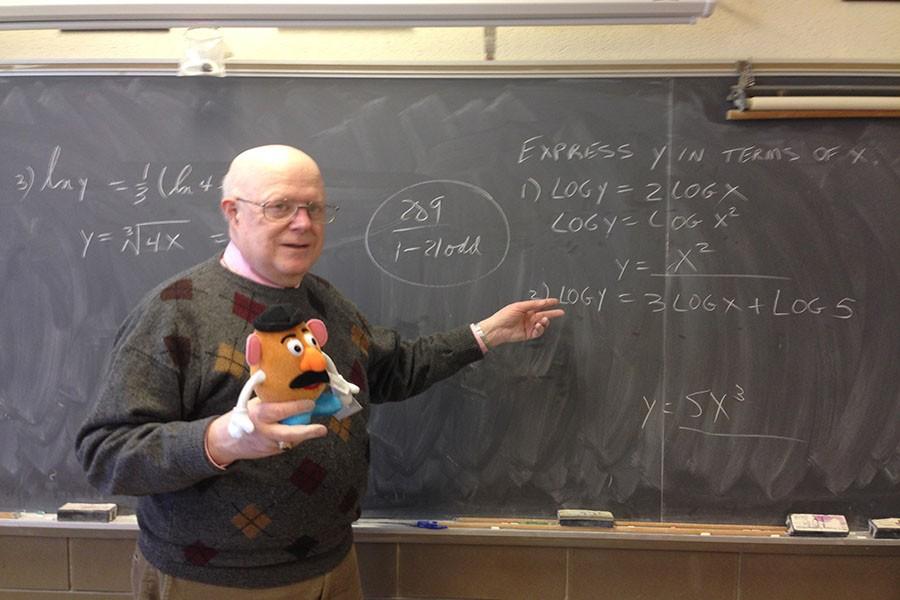 Calculus teacher George Appleby poses with one of his cherished Mr. Potatoheads at his board. Appleby has been a devoted math teacher at John Carroll for 43 years.

Waking up early in the morning and driving his Lincoln town car, George Appleby makes a routine stop at Bel Air Bakery, where they already have his coffee ready for him. He picks his treat and heads to JC to teach his favorite subject, math.

Appleby’s math career began at Albany State Teacher’s College. He graduated earning a degree in math/science. He later went on to get his a masters degree in math.

He recalled taking a “Strong Vocation Interest Test” during his time at Albany.

“My number one vocation was farming, but math and physical science was a close second. Math was always either x equaled 7 or it didn’t, and that is what I love about it,” Appleby said.

Appleby did more than just go to school during college. During his freshman year he joined the Naval Reserve and was accepted into the Reserve Officer Candidate (ROC) program not long after. He attended training and participated in drills once a week and during summers. He served three years and went on to be an instructor at the Naval Academy Prep School (NAPS), located near Port Deposit in Cecil County, MD. There he was drawn to math and discovered his passion for teaching it to others.

“While I was teaching at NAPS, the Academic Director was leaving. He came to JC looking for a job, and he spoke to the VP at the time, Jim Long. He called me on the phone and said that JC was the school for me. I took his advice, and 43 years later I’m still here,” Appleby said.

During his teaching career at JC, Appleby has taught thousands of kids. He has taught every level of math and all year levels. For the past few years he has been teaching AP Calculus (AB), Honors Pre-Calculus, and Algebra 3/Trigonometry.

“I have taught some very bright students, and I have learned that having time one-on-one with students really helps even the smartest kids. It is also rewarding to me to see their growth and get to know them a little better too,” Appleby said.

Along with teaching all levels of students, Appleby has had to adapt to changes. The use of the graphing calculator is a big part of math classes today and was a major obstacle for him to learn and adapt to.

“Calculators have revolutionized math, but all math can be done with paper and pencil and some needs to be done without a calculator. Math is important in today’s society, and knowing how to do it and not rely on a calculator is key,” Appleby said.

He definitely has a collection of calculators of all shapes and sizes, but he has collected something else over the past few years.

Appleby has a collection of potato heads given to him by students over the years.

“The number is approaching 70, and I consider each one a treasure,” Appleby said.

Appleby strives to be a “good teacher and role model” to his students, not only those at JC but other schools before JC.

“I hope to be remembered by my students as a good teacher who challenged them to do their best,” he said.

He shares a quote with parents on mini-mod night to show his intentions as a teacher from a university in New York.

“Everyone who remembers his/her own educational experience remembers teachers, not methods and techniques. The teacher is the kingpin of the educational situation. He makes and breaks programs.”

Mike Moxley is a Multimedia Editor for The Patriot and jcpatriot.com. 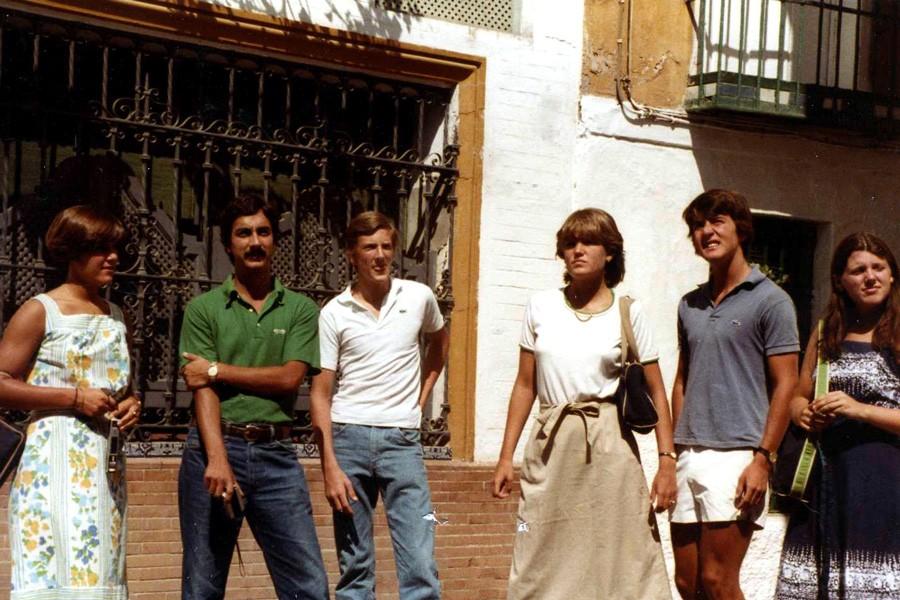 President Richard O'Hara (second from the left) stands with a group of students on a trip to Spain in 1981. O'Hara taught all levels of Spanish before moving into administration.

Before he became a school administrator, President Richard O’Hara was a Spanish teacher.

“When I got out of college, I did not have enough money to go right into graduate school,” O’Hara said. “I taught [for] a matter of weeks, and I said, ‘This is it. I love this. This is great.’”

Although it was not planned, the jump to teaching came naturally for O’Hara. Throughout his career, he taught at least one class for 21 years, beginning at Woodberry Forest School, an independent school in Virginia. O’Hara taught not only all levels of Spanish but also an elective political philosophy class and even Introduction to Christianity for international students at JC one year.

Not long after he started teaching, O’Hara began taking on administrative roles.

“I was given some administrative-type assignments when I first started [teaching]. I was asked to create a service program, which is still there 35 years later,” O’Hara said.

He also ran the social activities at Woodberry Forest School because it was a boarding school, ran the summer program, and was director of counselling for his final five years at the school. He attended summer school and night school to finally gain his master’s degree in Administration.

“I like both. I like the administrative part. I like teaching,” O’Hara said. “But I think a lot of administrators say this: you miss the classroom.”

Through his career, O’Hara spent the majority of his teaching days with high schoolers. According to him, the best teachers take an interest in the lives of their students and, to have an impact, need to help them handle “the mere fact of being 15, 16, or 17.”

That’s what I loved about teaching. There was a chance every day to further somebody, to help someone, to encourage somebody, to show them a good path.”

“You’re dealing with a whole human being here,” he said. “That’s what I loved about teaching. There was a chance every day to further somebody, to help someone, to encourage somebody, to show them a good path.”

According to O’Hara, as he matured as a teacher, he transitioned from a get-through-the-book-by-June mentality to one that focused on the needs of the students and on making them better people.

“I came to the realization that when you teach a foreign language, you have the opportunity to move people out of their more narrower perspective and give them a glimpse into a global perspective,” O’Hara said. “I can’t effect change on a global scale, but in my world, as a teacher, I can do my part to open eyes and to encourage them to be more open-minded people.” 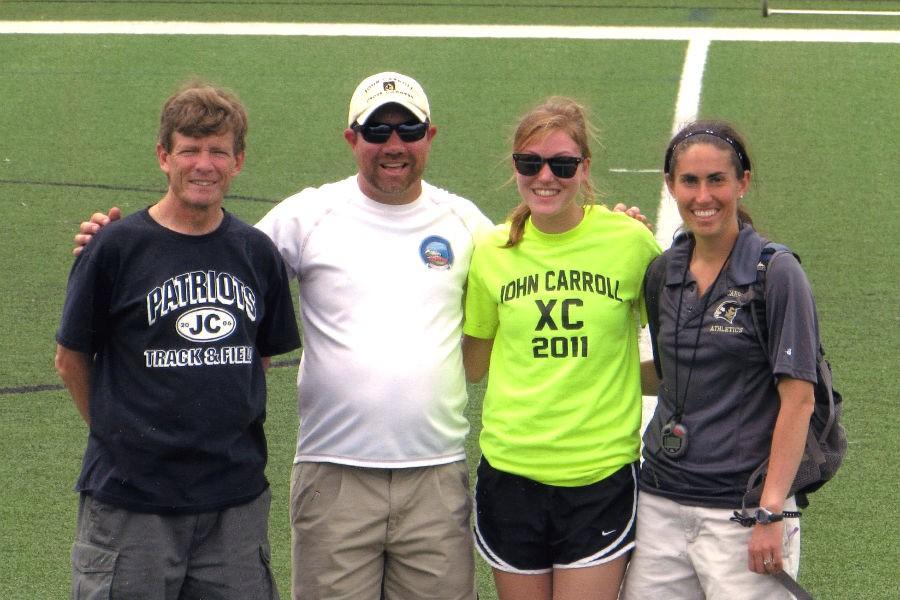 Math teacher and cross country coach Courtney Von Lange (far right) poses with senior runner Amanda Spaeth, class of '14, and coaches Mike Monaghan and Robert Torres after the last meet in 2013. Von Lange has worked and coached at JC since 2012.

Math teacher Courtney Von Lange didn’t start out as a teacher. She was working in environmental engineering when she began to wonder if what she was doing was making a positive impact.

“After being in that field for a while, I wondered if it was the best thing for the environment,” Von Lange said. Most of her work involved stream and wetland restoration.

According to Von Lange, the construction and problem-solving that she was doing began to look like a simple Band-Aid. In order to help people understand how their actions affect the environment, she began to think about teaching.

To achieve her goal, Von Lange got a certificate in physical science, the closest thing to certification in environmental science, which was what she wanted to do. Soon after, she was hired at JC for the 2012-2013 school year.

“They were looking at my background and said, ‘You could also teach math, couldn’t you?’ because I had done a lot of math when I was in college,” Von Lange said. “I thought that if we had people who understood math working for the environment, maybe we wouldn’t have some of the problems or misconceptions that we have.”

Von Lange had had a year of teaching experience before her work at JC. After college, she was applying to graduate school but not going right away. She heard about an opening for a teacher at Oxford Academy, a boys’ boarding school in Conn. where her grandfather had worked and decided to do that for a year to save money. While there, she taught calculus, pre-calculus, and a geology elective.

The other aspect of her job is coaching girls’ cross country, indoor track, and outdoor track. Coaching was another reason that Von Lange wanted to switch careers to teaching.

“I was involved in [coaching] when I was in high school and college, and I missed that connection,” Von Lange said. According to her, it’s similar to teaching in that coaches try to establish a long-term plan for the season the same way that teachers have an outline for the semester, week, or even day.

In coaching, according to her, the relationship with the students is slightly different than in teaching because the coach trains the physical body while the teacher trains the mind.

Through her time at JC, Von Lange has taught Environmental Science, Algebra 2, Engineering, and Algebra 3/Trigonometry. Next year, she may also teach calculus.

“We need people who understand math, numbers, and especially statistics, to work for the environment,” Von Lange said.