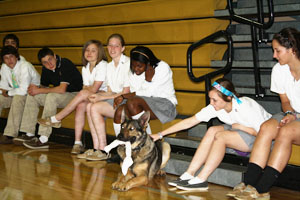 Who let the dogs out?

Officer Marty Hoppa of the Harford County Police Department and his K-9 partner six-year-old German Shepard Bruno paid a visit to Rodney Johnson’s government class yesterday on May 18.  The class met in the upper gym for the demonstration.

According to Johnson, the purpose of the visit was to show the class how law enforcement works and how the police use K-9 forces.  “A lot of kids showed interested in careers with law enforcement,” Johnson said.  Johnson took a class at HCC with Colonel Cavlearo about law enforcement and criminology, and the Colonel offered to have an officer come talk with Johnson’s students.

“We talked about search and seizure… certain ways you use the dog,” Hoppa said.

According to Hoppa, Bruno has tracked down 8 people in the past for drugs and uncovered a great amount of drugs that he was not able to calculate on the spot.  Bruno can also smell drugs on drug money.  According to Hoppa, the scent stays on the money for a short period of time, thus also proving that the money was used to purchase drugs recently.  This can be used as evidence to the arrest of drug dealers.

The dog demonstrated some obedience work, hand signals, non-verbal signals for the class.  The police dog also sniffed for the drugs that were hidden by Johnson under a trash can in the gym.

According to Hoppa, the dogs are taught to “go right at the source.”  Bruno is trained to grab drugs with his mouth, however, police are recently trying to teach K-9 dogs to sit at the location rather than just grab the drugs, because there is the danger of accidental and harmful ingestion.

Hoppa stressed on the importance of having K-9 forces.  According to Hoppa, if a criminal chooses to give himself up, the dog can be recalled, making him a valuable tool.  Hoppa also highlighted other positive aspects of Bruno, such as intelligence and great strength, and the students were able to take turns petting Hoppa’s furry partner near the end of the demonstration.

Grace Kim is a Managing Editor for “The Patriot” and jcpatriot.com