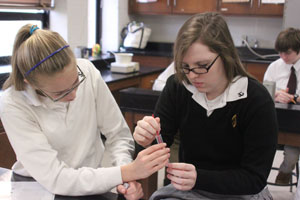 Junior Rebecca Driver and senior Alyssa Goheen experiment with DNA and E. Coli in AP Biology. Science Department Chair Rebecca Jansing-Kaestner hopes that giving students the option to graduate with a distinction in science will encourage students to have more hands-on activities such as this.

Though the STEM academy that will be implemented next year is primarily for incoming freshmen, current students will not be left in the dust of science, technology, engineering, and math.  For students who wish to pursue a career in science, the option to graduate with a diploma with distinction in science is a new addition this year.

Science Department Chair Rebecca Jansing-Kaestner introduced juniors to the option of graduating with a distinction in science at a class meeting a few weeks ago, to the joy of many students.  “I was about to jump out of my seat.  I was going nuts,” junior Carol Zubrowski said.

To graduate with a distinction in science, students would be required to have a total of five science credits and center their senior project on science.  The last part of the requirement is up to the student:  he or she could participate in an internship, take a summer science course, shadow three different scientists, or participate in a science extracurricular activity for two years, according to Jansing-Kaestner.

Junior Hunter Kothenbeutel was one of these students who planned on signing up for extra science courses even before the option to graduate with a distinction in science was offered.  “I had always been interested in science, and I wanted to take AP Biology and Physics,” he said.

Jansing-Kaestner strongly suggests that students do an internship if they are able to.  “Colleges see that you’re serious about moving into training.  Part of that job training is being reliable and learning to work with others,” she said.

Jansing-Kaestner “can’t guarantee everyone an internship,” which is why Zubrowski is looking into the job shadowing option.  Zubrowski grew up in a family full of scientists and engineers.  “My family’s one big group of nerds and I love them for it,” she said.  She hopes to be able to become involved with her family’s work in the field of computer engineering.

Zubrowski had first gotten hands-on experiences with different types of science during a summer science camp at Stevenson University during middle school, where she learned about physics, forensics, and how to ride a hovercraft.

Jansing-Kaestner hopes that students will take advantage of the new option to graduate with a distinction in science in order to have that same kind of hands-on experience that Zubrowski did.

According to Jansing-Kaestner, a few options for students would be shadowing various engineers and scientists at the University of Maryland or signing up for internships at Aberdeen Proving Ground or Edgewood Proving Ground.

Sophomore Abbie Swanson is looking into these various summer programs to find the one that best suits her interest in anesthesiology and medicine.  “I sent in an application to APG [Aberdeen Proving Ground] and SEAP [Science and Engineering Apprentice Program] for this summer.  I might be too young, because the age is 16, but I’m hoping I’ll still get in,” she said.

Swanson also hopes that graduating with a distinction in science will make her stand out to colleges when the time comes to start searching.  Jansing-Kaestner similarly feels that a diploma with a distinction in science will give students a leg up.  “When colleges find out about it and look at the rigor that the student has done, it may open up the possibility for scholarships and getting into a better school,” she said.

Jansing-Kaestner hopes that, in the future, more students will be interested in graduating with a distinction in science.  “I’m hoping for more [students] to be interested, because we have to look more towards science and engineering.  I don’t know that this generation realizes that that’s their task to work on…I don’t think they understand the ramifications of not doing it. It opens up so many doors,” Jansing-Kaestner said.

To read more about the upcoming STEM Academy, go here.