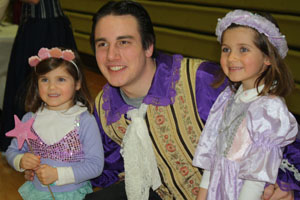 Elementary school student Morgan Lewis had a magical birthday on Saturday, March 3 at first ever Cinderella Tea fundraiser, following the Theater Department’s performance of “Cinderella.”  At the tea, children received wands, took pictures, and got autographs from the cast of “Cinderella” while enjoying various desserts and beverages.

“My favorite part was getting autographs from the fairy godmother, stepmother, and stepsisters,” Lewis said.

“It was funny, because some of the kids wanted a hug, but them some of them came up to me asking why [the stepsisters] were so mean to Cinderella,” sophomore Erin Huffer, who played the stepsister Joy, said.

The tea was originally the idea of director of “Cinderella” Laura Lang. With directing the musical already on her plate, she sought help from the Patriot Parent Association (PPA) to orchestrate the tea.

To make the fairytale experience more realistic, Lang requisitioned the help of the cast.  “[The cast] was going to be there anyway, and they would enhance the experience…It was like Disney, get your pictures taken with the characters,” she said.

At the tea, a backdrop was set up where senior Stephanie Meadowcroft, who played Cinderella, and senior Chris O’Neill, who played Prince Christopher, stood, available for pictures and autographs.

“I thought that the tea was a really cute idea, especially since the play was ‘Cinderella’ and there’d be a lot of little girls wanting to have their picture taken.  I thought it’d be a perfect opportunity for all the little girls to meet the characters,” Meadowcroft said.

“I thought it was really cute how the kids were so excited to get their picture with us,” O’Neill said.

“About half the kids were star struck, meeting a Disney character.  The other half of them were half crying and terrified, being forced by their parents.  I really enjoyed seeing them believe in the story.  It made me feel like I did my job well,” sophomore Lindsey McCumber, who played the stepmother, said.

Back in December, the PPA had hosted a similar fundraising event before the performance of “White Christmas.”  All of the tickets to that event were sold, “so we knew that this kind of thing worked,” Lang said.

The Cinderella Tea upped the ante and raised 1200 dollars total, more than the White Christmas dinner, even though both times all 250 tickets were sold out.  “[The Cinderella Tea] was sold out probably a week before the event.  We wanted to limit it to 250 and the tickets flew out the door,” Lang said.  According to Lang, about 500 dollars of the profits will go directly towards the Theater Department.

“It was a really good fundraiser for the Theater Department and the school,” junior Thomas Gardner, who played Lionel, said.

A few members of the faculty took advantage of the Cinderella Tea to spend time with family and friends while the kids could have fun too.  Guidance counselor Carrie Siemsen brought “14 of her closest friends” to the tea.  “I thought it was a lovely idea, I love the decorations.  I love how all the characters went around and talked to the little girls.  The wands were a nice touch,” she said.

Secretary Susan Strawbridge attended the tea with her niece, grandniece, two grandnephews, her mother, her father, her aunt, and a few cousins.  “I think it’s fantastic.  The characters are great, they’re still in character.  The kids will remember this for a long time,” she said.

“The joy they brought to the kids, you can’t measure that.  For a first time doing this, I was thrilled with the results,” Lang said.