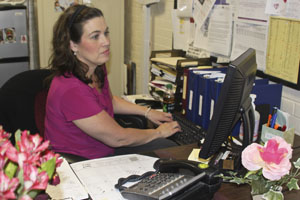 The main office hallways will be losing one of the smiling faces that greeted the students throughout the day, after this week. Nurse Laura Frank has announced that the week of April 23 will be her last week at JC.

Frank decided to leave for personal reasons and to continue her work in medicine at Gilchrist Hospice Care. This new job requires her to work only three days a week compared to her normal five days a week for school.

“It’s in-patient, so it’s nursing care, but it’s also more support for the family both spiritually and medically.  We try to give someone a good death and make it as positive as it can be.  It’s not a hospital atmosphere, it feels more like home,” Frank said.

President Richard O’Hara wishes Frank success in her new position. “We’re very happy for her that she has a really good opportunity. No doubt, she’ll be wonderful in her new position. We really appreciate her dedicated service. She has not only been a great school nurse and member of the community, but also had a special role as an educator, a teacher, passing along information on health issues and just going above and beyond in making for a healthier community,” O’Hara said.

Frank got the idea for the job when she worked with her uncle while he was in Gilchrist Hospice Care. After he passed on, she was approached and offered a position there. During Christmas vacation, she took time to learn about the place and was interviewed.  They offered her a job just a few weeks ago.

“I feel like it is a good place to go. John Carroll is a wonderful school, great kids and faculty, and I’m going to miss all of you,” Frank said.

Ashley Moxley is a Multimedia Editor for The Patriot and jcpatriot.com.