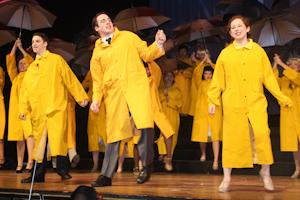 (From left to right) Sophomore Brady Fritz, senior Thomas Gardner, and junior Karly Horn perform the final song of “Singin’ in the Rain.” The Theatre Department will travel to Disney World to perform four numbers from the production.

The last time the department went was in the summer of 2010.

According to Director of Admissions and Director of Fall Musicals Kim Brueggemann, the group of students who went in 2010 were able to get a “tour behind the scenes of Disney.” This included a dance workshop opportunity with professional Disney peformers.

This year, they will be performing mostly in Downtown Disney.

According to Brueggemann, “we will perform in the heart of Downtown Disney.”

The event is non-competitive, and according to Brueggemann, the group will be performing in an open theater to guests in the park.

To get accepted into the event, the department had to send a video of their performance, show their intended costumes, and let Disney know the various dates they were available to come.

After that, they waited to hear back for their acceptance confirmation, the dates they were going, and the stages they were performing on.

At the time of this publication, the department administrators had not chosen a set performance yet.

“We are not positive yet, but our plan is to do four numbers from ‘Singin’ in the Rain’,” Brueggemann said.

During their visit, according to guidance counselor and choreographer Larry Hensley, they will be staying in one of the park’s “all-star resorts,” but their exact resort is not confirmed.

Haley Kyger is a Sports Editor for The Patriot and jcpatriot.com.