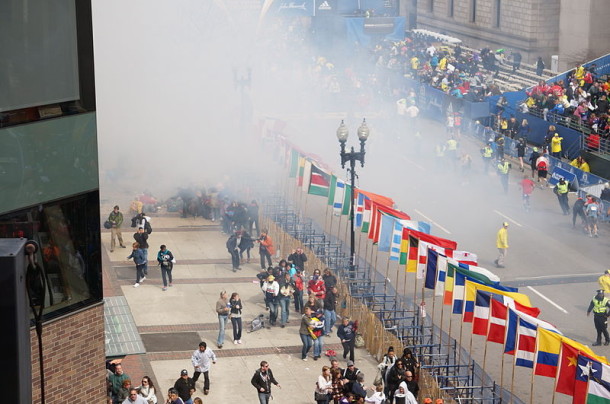 The frantic, panting voice was what worried her the most. “Courtney, it’s Mom. We’re at the Boston Marathon and there were two explosions at the finish line. We don’t know what it was. It’s kind of scary. We’re fine. Turn on the news and call us. Please. Love you. Bye.”

One hour after the bombings at the Boston Marathon took place on April 15, science and math teacher Courtney Hugo listened to her voicemails, one of which was from her parents attempting to make their way out of the panic-stricken city. “She said then that she was okay . . . but you never know what this person had planned and what else was going to happen,” Hugo said.

Hugo’s parents volunteer at the Marathon each year and helped set up before the race got underway. According to Hugo, her family has a deep connection with the Boston Marathon. Growing up, Hugo and her sisters would miss a day of school and watch the Marathon atop Heartbreak Hill at mile 21. Her parents were runners and thought the Boston Marathon was “fascinating,” although they never ran it.

Hugo herself ran the marathon five times, beginning in college. Her parents began volunteering when she began running the Marathon. This year, Hugo didn’t qualify, but her parents were standing at the finish line just 10 minutes before the bomb went off. Hungry, they traveled one block parallel to the bomb scene to get lunch.

According to Hugo, upon hearing the blasts, her parents said to each other “that doesn’t sound good. That noise doesn’t sound right.” After learning that the noise was a bomb, they helped two foreign marathon runners to their hotels and left the city. Hugo’s parents were okay, other than not being able to sleep in the days following the bombing, due to the impact the scene left on them.

Senior Hunter Kothenbeutel also had a family member at the race. His dad, Scott Kothenbeutel, ran the marathon and finished about 20 minutes before the bombs went off. “He was back at his hotel and didn’t hear about it until people called him and texted him,” Kothenbeutel said.

English teacher Celeste Smith did not have any family at the Marathon, but her grandson’s preschool teacher, Erika Brannock, was one of the spectators severely injured. “My understanding is that the students in his [her grandson’s] class were told that she was hurt, but would be better soon. The students were not told she was in Boston … their whole school is rallying for her, sending messages of love and support,” Smith said.

According to Campus Minister Patti Murphy Dohn, at least two alumni were in the race, including Samantha Hastler, class of ’01, and David Stevenson, class of ’93. “The perpetrators of this disgusting act and others like it think they can bring us down and tear us apart. They have yet to realize that it only serves to bolster our unity,” Stevenson said, according to the Catholic Review.

Hugo echoes Stevenson’s mindset. “If they wanted to scare people . . . or bully people, they picked the wrong city and the wrong group of people. Marathon runners have to be very resilient and very positive to get to that point . . . just the city of Boston, it’s a tough city with tough people,” she said.

She worries that the “great atmosphere . . . where you could run the whole race and be getting high fives the whole way,” will change due to the tragedy. However, she predicts that she doesn’t think “they’re going to let it change that much,” she said.

Both Hugo, her parents, and Kothenbeutel’s dad will not let the tragedy deter them from coming back.

“I’m really determined to qualify and get back there next year,” Hugo said.

Kailey Tracy is Copy Chief for The Patriot and jcpatriot.com.