Social Studies teacher presented with Teacher of the Year award 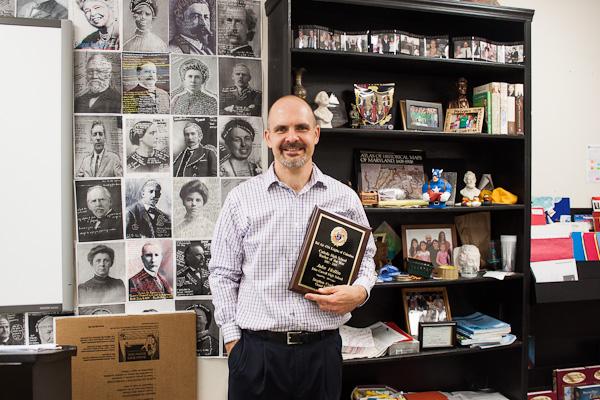 The Knights of Columbus of Bel Air named social studies teacher Jake Hollin as Catholic High School Teacher of the Year. Hollin was named Teacher of the Year on Feb. 28. The award presentation was held on March 18 at 6:30 p.m. at the Newport Room in Forest Hill.

“It’s very honoring. Honestly, I feel like I represent all the great teachers here at JC,” Hollin said. “I am excited that my daughter, who will be a freshman at JC, will have some of these great teachers next year.”

Principal Madelyn Ball, Vice Principal Gary Scholl, and Hollin’s family accompanied him to the award presentation. According to Ball, she is extremely proud of Hollin’s achievement, as she was the one who nominated him. An excerpt from the letter nominating him can be found on the JC website.

Hollin credits his achievement to how he is “inspired all the time by what my colleagues are doing.”

According to Hollin, “I work with a staff of Catholic High School Teachers of the Year.”

Hope Kelly is the Editor in Chief for The Patriot and jcpatriot.com.