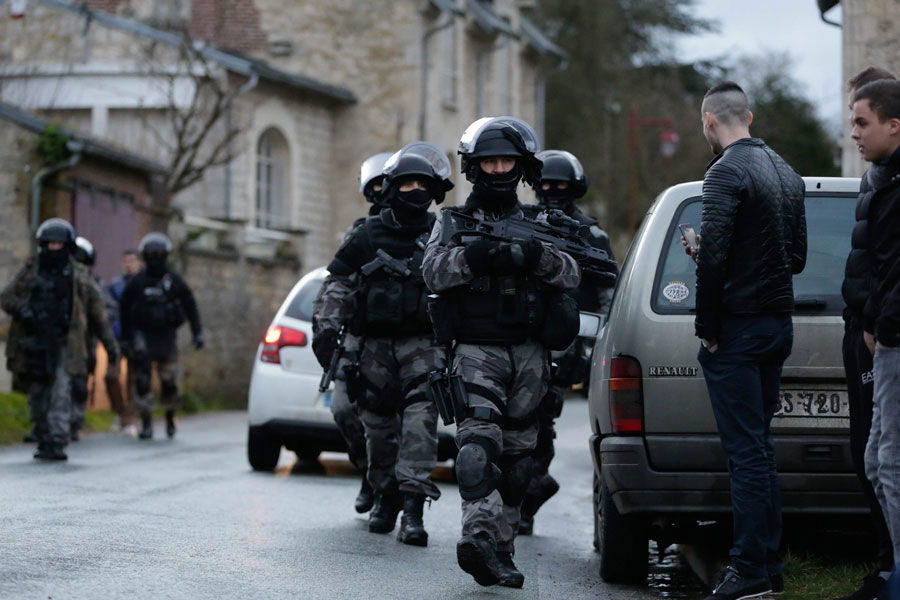 French police officers patrol north of Paris during the manhunt for the gunmen in the shooting at the satirical French magazine Charlie Hebdo headquarters on Thursday, Jan. 8, 2015. The two suspects reportedly robbed a gas station in the north of France.

A wounded police officer desperately pleads for his life, but there will be no mercy today. He is shot dead without hesitation.

Shots rang out in the streets of Paris at 11:30 a.m. on Jan. 7. Two masked men rushed into the headquarters of the French satirical magazine Charlie Hebdo and killed 12. These grisly images were captured by amateur video. It was the deadliest terror attack on French soil since the 1961 Algerian War.

Charlie Hebdo had published several cartoons mocking the prophet Muhammad. In Islam it is forbidden to make any images of Muhammad.

On Twitter one Jihadist said, “#Paris Is Burning. Oh Allah slaughter them, Allah attack them. This newspaper insulted the Messenger of Allah and Islam.” Another said the gunmen had turned Paris into a, “Battlefield.”

Students reacted differently to the news. “It doesn’t directly affect us, but the fact someone would do that is disturbing,” senior Garrett Wade said.

“I think people should have freedom of speech and it’s wrong to kill people over a satire,” sophomore Edward Benner said.

“With freedom of speech they can say what they want, but they were really offensive. If someone made fun of something I cared about, I would be offended. I obviously wouldn’t kill them but I understand the reasoning. Still people shouldn’t die for things they say,” senior Ashley Hunter said.

One man turned himself in to the French police. The two gunmen remain at large. It is believed the two gunmen are the brothers Cherif and Said Kouachi. French intelligence believes that Said travelled to Yemen in 2011 to link up with an al Qaeda. He was also arrested in 2005 for terrorism and convicted in 2008 according to the New York Times.

The French government has launched a massive manhunt. In total 80,000 police have been deployed all over France due to a now heightened state of security. The suspects were cornered in the town of Dammartin-en-Goële, 25 miles northwest of Paris in an industrial park. They took at least one hostage and said they wanted to die as martyrs.

According to the BBC, on Jan. 9 French police stormed the industrial park and a supermarket on the edge of Paris where several hostages had been taken by someone believed to be in connection to the Charlie Hebdo shooting. In both cases, the gunmen were found dead.

Justin Hawkins is an Opinion Editor for the Patriot and jcpatriot.com.

According to Vice Principal of Student Affairs Brian Powell, the spring dress code could consist of simply black and white polos, compared to a variety of colored polos that currently roam the halls.

According to Powell, the reason for this switch is due to “unauthorized polos” that have entered the dress code.

“[I get a lot of emails] whenever we have days where groups are wearing different polos and they [the faculty] say ‘is this an authorized polo?’ I really want to remove that question from the faculty and the administration,” Powell said.

Junior Faith Ensor, a member of the National Art Honor Society, thinks this is somewhat unfair. “It’s upsetting because we were given free reign to wear [our Fine Arts polos] whenever we wanted at first, and now, out of nowhere, are getting that privilege taken away, but us art kids will live,” Ensor said.

Gold, black and gold mixed, and even green and grey striped polos are currently worn by some students, along with the colored polos worn by the Art Society. According to Powell, these are not allowed.

“Originally, the intent for the [team] jackets and the polos was to say ‘I have a game today’ or ‘I have a meet today,’” Powell said. “That’s why we allowed them in the first place. It’s just gotten far beyond its original intent.”

The gold lacrosse polos would also be affected by this change.

“I think that the black and white lacrosse polos are not only more comfortable than the regular polos, but they look nicer,” junior lacrosse player Michael Imbierowicz said. “I don’t have a gold polo, nor would I want to wear one, [since] it looks weird with the dress code. If they tell me I can’t wear them during non-game days, I’m going to do it anyway because [I have worn them] for the past two years.”

“We haven’t finalized the plan yet so we’re still discussing what to do,” Powell said. “What we want to do is move towards more uniformity.”

Mitch Hopkins is a News Editor for The Patriot and jcpatriot.com