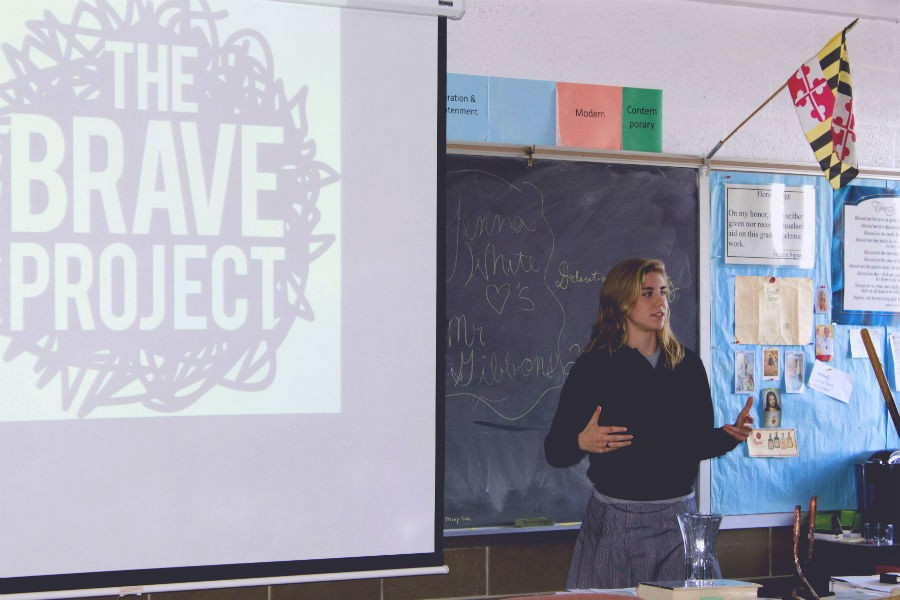 Senior Jen Linsenmeyer wants you to be brave.

“It’s something that sticks in your mind, like a foundation for when something hard comes along,” Linsenmeyer said.

“The Brave Project” began when one of her friends committed suicide in March 2013.

“She was so innocent, and she had really pure intentions,” Linsenmeyer said. She knew that something must have been terribly wrong in her friend’s life for her to be driven to suicide.

Soon after her friend’s death, Linsenmeyer heard the song “Brave” on the radio and was touched by its message. Using the song as a focal point, Linsenmeyer created her project with the idea that if she could reach out and touch even a few others, it would be a success.

Between Jan. 15 and 20, Linsenmeyer spoke about “The Brave Project” to all senior, junior, and sophomore religion classes, as well as three sections of freshmen. She explained the origins of the project and had them fill out an index card with what brave means to them. Linsenmeyer also invited them to be part of a video where students would show how they were unique through a special talent and explain what it means to be brave.

“I was inspired,” senior Bethany Toy said. Toy agreed to do the video in order “to be a part of something that inspires others.”

Linsenmeyer hopes to share the completed video in a schoolwide assembly in the spring. Starting next year, the video will be shown to each group of incoming freshman at the very beginning of the year.

“[JC] has a lot of people with trouble,” guidance counselor Larry Hensley said. “We [in the Guidance Department] were trying to come up with a program of empowerment.”

According to Hensley, Linsenmeyer’s project fits perfectly with what the department wanted.

“[Now], we can carry on that ‘Brave’ lesson to future years,” Hensley said.

The index cards with students’ reflections on bravery will also be displayed on a bulletin board in the Guidance hallway. According to Linsenmeyer, this is to show how students can “[use] their words to help each other.”