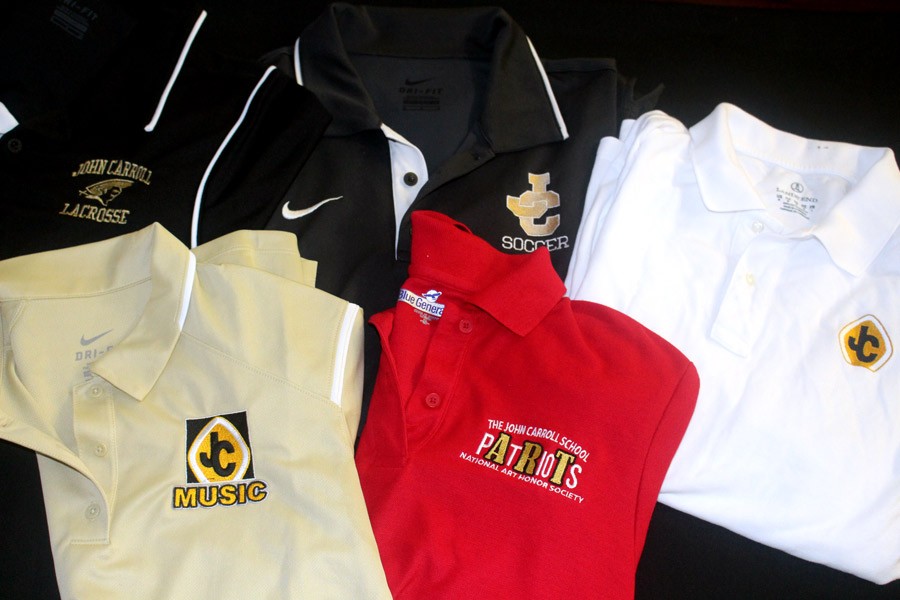 If the polo revision was enacted only one of these uniform polos would be deemed acceptable. The administration decided to delay actions regarding the polo policy due to student uproar.

Last year, those who were part of a sports team, band, or the National Art Honor Society had the option of purchasing an alternative polo that represented the activity in which they participated. In recent weeks, the administration has started working towards changing the policies regarding the polos worn and thought about requiring only official school polos be worn, unless a team has a game that day.

Currently, students are allowed to wear the different polos as long as they have been approved. Principal Madelyn Ball believes that it is a privilege to wear polos that support teams and clubs, but that it has gotten out of control, making students unrecognizable.

According to Vice Principal for Students Affairs and Technology Brian Powell, the polos have caused the uniform to become inconsistent. “We’re trying to restore some consistency to how our brand and uniform is being used,” Powell said.

Originally, the administration decided to ban the alternative polos for sports and clubs, but after widespread disapproval from students, the administration reviewed the decision. “In class, everyone was upset so we took it upon our responsibilities that we needed to get the voice heard ASAP,” senior SAC President Kishan Patel said. Senior leadership, including senior class President Joe Kyburz and senior class Vice President Parker Day, met with Powell and discussed alternatives.

“Our opinion was that seniors can’t be expected to buy new polos at this point, totally unreasonable. It’s also unreasonable to have sports teams that just bought polos, who were promised they could wear them, not be allowed,” Patel said.

According to Ball, students should be allowed to wear the polos only when the sport is in season. Several students who have purchased polos expressed their disapproval of this idea. “We should be able to represent our sports team on every occasion,” senior lacrosse player Matt Dees said.

Junior soccer player Nick Hinkie also expressed his disapproval of the new rule. “I don’t like [the change] because they said if we bought them, we could wear them, but then after we bought them they said we can’t,” Hinkie said.

Powell says that the rule of limiting polos will not be enforced right away but to expect changes to the spring uniform. “Parents have gone out and spent money on these shirts and I am not comfortable with abruptly saying ‘tomorrow everyone is in a uniform shirt,’ so it’s going to have to be a slow process,” Powell said.

According to Athletic Director Steve Teter, the changes regarding the polos aren’t new but an “enforcement of the rules that have already been written.” Teter expressed that sports teams across the board are disappointed. “Most people enjoy wearing their sports polo because it’s good to support their team,” Teter said.

In the future, polo or gear requests for any team will have to be approved by Director of Strategic Marketing and Communications Joseph Schuberth and Powell in order to have the colors and logos approved and to make them identifiable with the school.

Azanae Barrow is a Community Editor and Caroline Cooney is an In-Focus Editor for The Patriot and jcpatriot.com.