Lessons of the Shoah enlightens students 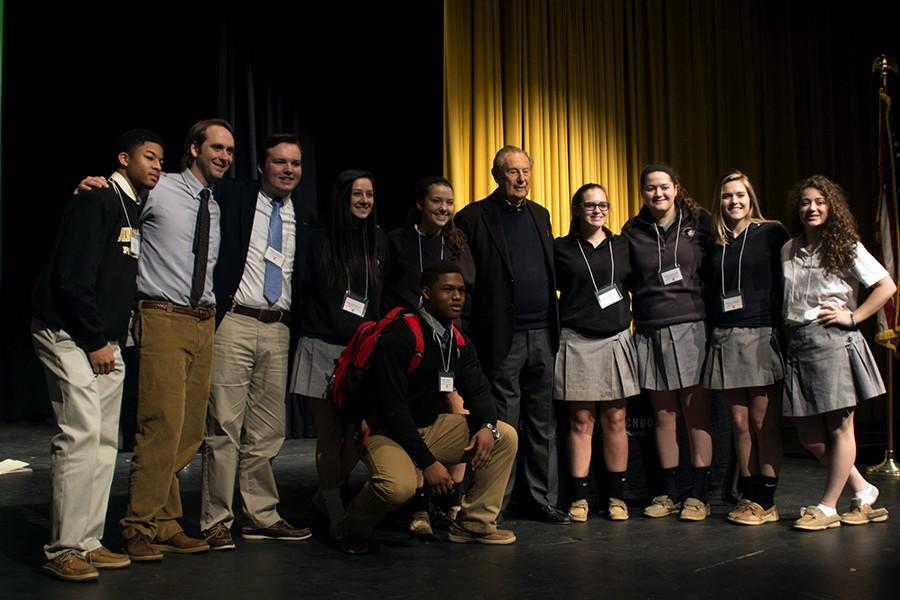 Sol Goldstein posed with U.S. History teacher Darrion Siler and his students after sharing his story. Goldstein was available for pictures and comments after he finished speaking.

The Lessons of the Shoah, which was on Feb. 25, continued to emphasize the importance of Holocaust learning. According to the Baltimore Jewish Council, this event uses the Holocaust’s lessons “as a starting point to encourage tolerance, understanding, and respect between students of diverse backgrounds.”

“I coordinated it, and JC hosted it, but it was held by the Jewish Museum of Maryland, the Jewish Council, and the whole event was really sponsored by Andy Klein of Klein’s Supermarket,” senior project coordinator Louise Geczy said.

According to Geczy, 20 different schools sent students to experience the event, including Mercy High School, Catholic High, C. Milton Wright High School, Connelly School of the Holy Child, and more. Students were able to choose two out of nine workshops to learn about certain topics regarding the Holocaust.

One sophomore from Holy Child went to the workshop called, “Winged Listeners: Sharing the Stories of Holocaust Survivors”, where storyteller Tamara Filipovic told survivor Morris Rosen’s story. “I really liked hearing the story about someone that was in the Holocaust, and I wish I could hear other people’s stories,” she said.

Filipovic took the course “Oral Histories of Holocaust Survivors” at Goucher College and graduated with a Bachelor of Arts in History. She believes that storytellers have the opportunity to continue to share the stories of the survivors with as many people as they can. “It’s our responsibility as human beings to hear these stories and to allow them to find a way for people who have gone through these really difficult things to tell them,” Filipovic said.

Filipovic hopes that storytelling will help others connect to the Holocaust and prevent it from repeating. “If you really connect to it and listen to it [the story], it’s amazing how much you can connect to that person and to that event, so then you’re able to share that story with the larger world and connect to other people,” Filipovic said.

Sophomore Sean Fleming from C. Milton Wright went to a workshop called “The Holocaust Through Film and Novel,” which talked about the background and influence of Holocaust-related films such as “Schindler’s List.” “We watched a Nazi propaganda film which I thought was really interesting because it showed what the typical Germans saw in Hitler versus what we see him,” Fleming said.

Along with the workshops, Sol Goldstein, who liberated a German concentration camp, shared his story. Junior Caleb Olsen thought that it was inspirational and brought a new perspective to the Holocaust.

“You usually hear about the survivors and now this time we got to see from the opposite spectrum about a soldier who had to liberate and what his reaction was to the Holocaust first-hand instead of a survivor who went through the Holocaust,” Olsen said.

According to sophomore Gabby Hanley from Holy Child, her school does “nothing big like this,” but students are always reminded of the Holocaust. “I remember two year ago, in eighth grade, a Holocaust survivor came in and talked to the whole school. Every single year we’re taught [about] at least one chapter of the Holocaust, so that’s really good,” Hanley said.

According to Geczy, days like this help change lives and allow students to share the experience of the survivors with others.

“I really do think this was successful,” Geczy said. “I feel like any time you can go into a place and come out a little bit better than before, with a little bit more knowledge than before, it’s a really good thing, even if we don’t like what we hear.”