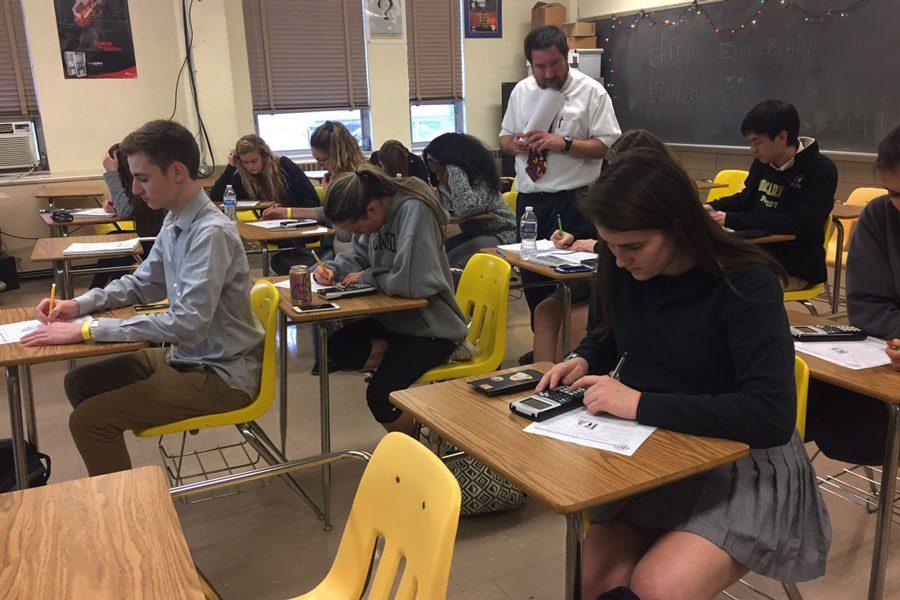 Senior Elizabeth Butz participates in the Math League competition on Dec. 13. The results from the first two competitions have put JC in an early lead to win the contest for the third consecutive year.

JC took an early lead in the county’s Math League competition this year. The Math League team at JC has won the regional competition for the past two years, and they have the chance to do so again for the second year in a row. After two competitions, JC has a score of 45, while the second and third place schools, C. Milton Wright High School and Aberdeen High School, have total scores of 32 and 31, respectively.

Math League consists of a series of six competitions held the second Tuesday of every month. Students are given a total of 30 minutes to answer six questions which get progressively harder.

Every month, the top five student scores are calculated and placed into the school’s overall score. On a given contest, the highest score a student can receive is a total of six points. According to Math Department chair and Math League coordinator Courtney Von Lange, there have only been four perfect scores achieved by students during her time as moderator.  “At John Carroll this is the third year that I have been doing Math League. I think we had one perfect score the first year and three perfect scores last year,” Von Lange said.

Senior Math League participant Elizabeth Butz agrees that having a background in geometry can help with Math League. “One of the biggest challenges I have is that I never took geometry while in high school, and I think that it’s a pretty important math course to succeed in Math League,“ she said.

Junior Laura Amrhein is a student participant who has competed in each contest since her freshman year. “I think that [Math League] is an amazing opportunity. It shows how strong our community is in math,” she said.

With the Math League team doing well, Butz believes they can win for a third year in a row. “I think it’s possible for us to win again, as long as we have people that are willing to try,” she said.

Amrhein also agrees that JC has a strong possibility of winning the competition again. “We have a lot of smart students who participate and succeed in  Math League,” she said.

Von Lange has high hopes as well. “We are in good shape … we are number one region, which includes Harford, Carroll, and Washington Counties. If students put forth the same effort that they did last year, they have a good chance at success,” she said.

Taylor Bynion is a Copy Editor for The Patriot and jcpatriot.com.