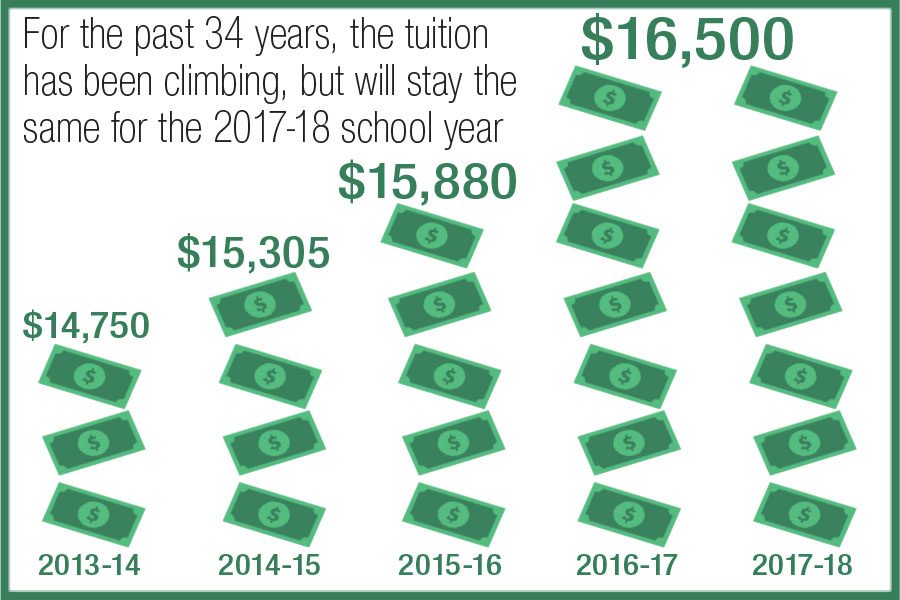 For the first time in 34 years, the tuition price will remain the same from one school year to the next.

The administration and the Board of Trustees recently announced in letters to families of current students that tuition will not increase for the 2017-18 school year. Instead, the tuition will remain “frozen” at $16,500.

According to President and Interim Principal Richard O’Hara, the Board of Trustees and the administration spent “a number of months” looking at school wide trends in terms of areas such as enrollment and marketing. Ultimately, they decided not to increase the tuition in order to appeal to a larger number of prospective students and their families.

The stable price is part of an effort to fulfill the school’s mission to be welcoming towards all students. “The heart of the decision is the historic mission of Catholic schools is to be accessible and affordable,” O’Hara said.

In the past, tuition prices have consistently increased from year to year and have changed more rapidly in recent years. Since 2007, for example, tuition has increased from $10,650 to $16,500.

While O’Hara only possesses tuition information dating back to 1983, this marks the first time in at least 34 years that the price has remained stagnant.

In addition to appealing to incoming students, the decision was also made in part to keep tuition relatively similar to other nearby private schools.

“There are indications that the economy is still sluggish, and families still hop around for [the] best deal for [an] independent school,” O’Hara said.

Director of Enrollment Edward Maynard believes that the tuition freeze will positively impact enrollment. “It allows us to be more aligned with our biggest competitors like IND, Mercy, and Calvert Hall. It provides a level of relief to families,” Maynard said.

Likewise, junior Rosemary Gillam thinks that the decision will benefit the school in terms of the quality and quantity of prospective students. “It will allow more people to come here, and we can be more selective because we might have a bigger pool of applicants,” she said.

While O’Hara does not know if the tuition will remain frozen for years to come, he admits that the rate at which tuition increases will slow down. However, he stipulates that the needs of students and expenses of the school will still have to be met first. “We would not sacrifice any program for this [tuition freeze],” O’Hara said.
Paige Alban and Ianna Pirozzi are In-Focus Editors for The Patriot and jcpatriot.com.