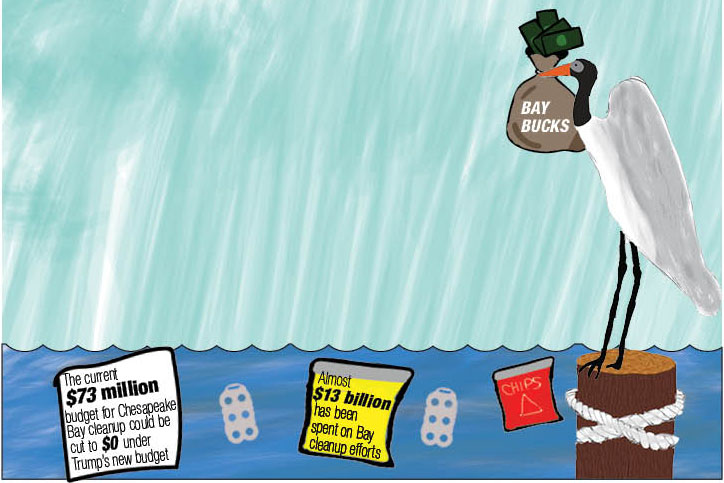 Junior Jessica Bauer stares over the edge of the boat as she and her family travel down the Middle River, a tributary of the Chesapeake Bay. She sees splashes of color floating on top of the murky water that don’t fit in with the surrounding ecosystem. These splashes of color are various pieces of garbage, including plastic bottle caps, soda can rings, and candy wrappers.

Seeing trash is not uncommon for Bauer when she is boating, and for her, it has always been this way. “Ever since I was little I haven’t seen any change. It’s dirty, and even with the money to clean it up, nothing has changed,” she said.

Junior Bella Brooke, who goes crabbing with friends, agrees with Bauer and has not seen a positive change in the water quality. “From my experience on the Bay, the Bay is dirty. You can see the trash floating in it and the water is much more turbid than the past,” Brooke said.

The problem Bauer and Brooke see when they go boating or crabbing could become worse in the upcoming years due to budget cuts. President Trump’s proposed budget, released by the Office of Management and Budget, reduces funding for many major programs, with the Environmental Protection Agency’s (EPA) budget being the most affected.

However, at the time of publication, President Trump’s proposition to cut funds was merely a recommendation, according to Delmarvanow, a news source that is part of the USA Today network. The final budget is ultimately decided by Congress and must be approved or changed by Oct. 1, 2017 for the 2018 fiscal year.

The proposed plan slashes the EPA’s budget by 31 percent from $8.2 billion to $5.7 billion. According to the Washington Post, these cuts would eliminate 3,200 jobs and discontinue over 50 programs that are currently funded by the agency.

Among the 50 programs being discontinued is the Chesapeake Bay Program, which received $73 million in funding last year. In the proposed $427 million cut of regional funding from the EPA, the Chesapeake Bay Program would be reduced to $0 next year according to the Daily Press. This means that all Bay cleanup efforts will become the sole responsibility of state or local governments with no federal aid.

“Of the $73 million budget that goes from the EPA to the Chesapeake Bay, about $59 million of that is split up and provided to local governments, state governments, community groups, and nonprofits to do cleanup work. If this proposed budget were to go through and approved by Congress … all monitoring and research would be halted,” Assistant Director of Media Relations with the Chesapeake Bay Foundation Tom Zolper said.

Junior Evan Tridone agrees with President Trump’s proposed budget cuts and believes that the federal government should not be tasked with environmental upkeep.

“I think the federal government should have some sort of influence, but it should be left to the states to make the laws,” he said.

Despite not seeing any difference in the water quality, Brooke still believes that funding for the cleanup efforts should be continued. “The only way that things even have a chance of getting better is if funding is continued. If funding is cut, the state of the Bay will waste away at a much faster rate,” she said.

According to Zolper, federal funding plays an important role in restoration efforts. “Think about this agency as being sort of a doctor of this ill patient, and the doctor needs to have information. There’s a lot of science that goes into cleaning up the Bay,” Zolper said.

Unlike Zolper, Tridone believes that federal money should not be used to clean up the Chesapeake Bay. “I do believe that the Bay’s funding is needed and extremely necessary because it is really important and needs to be saved. This saving is not up the federal government though,” Tridone said.

The federal government’s allocation of funding and initial restoration efforts to fix the Chesapeake Bay’s declining health began in 2010. In that year, the EPA established the Chesapeake Bay Total Maximum Daily Load (TMDL).

It is designed to institute measures for bay and tributary restoration, which should be 60 percent complete by 2017 and fully established by 2025.

In an investigative piece written by Alex Jackson for the Capital Gazette in 2013, the effectiveness of federal funding is debated.

“Tens of millions have been spent on programs critics consider nearly ineffectual, including a state and federal effort to recover the bay’s oyster industry,” Jackson said in the article.

Jackson makes the argument that the problem lies in the complexity and inability to accurately track the path of the funding. “It’s hard to track funds used for bay restoration from source to destination, so it’s equally hard to calculate trends and determine what’s efficient,” Jackson said.

Although the overall effectiveness of the federal funding is debated, Brooke believes that the quality of the Bay will decline if President Trump’s budget is approved. “It’s important to save the Bay because so many different species of animals live in the Bay and some people make their living off of the Bay,” she said.

Bauer agrees with Brooke, and she thinks that it is important to save the Bay. “It would impact my life because if it gets to the point where I can’t swim in it or fish or crab, I will have lost one of my favorite things to do,” she said.

Lauren Becker is a News Editor and Edward Benner is an Entertainment Editor for The Patriot and jcpatriot.com.