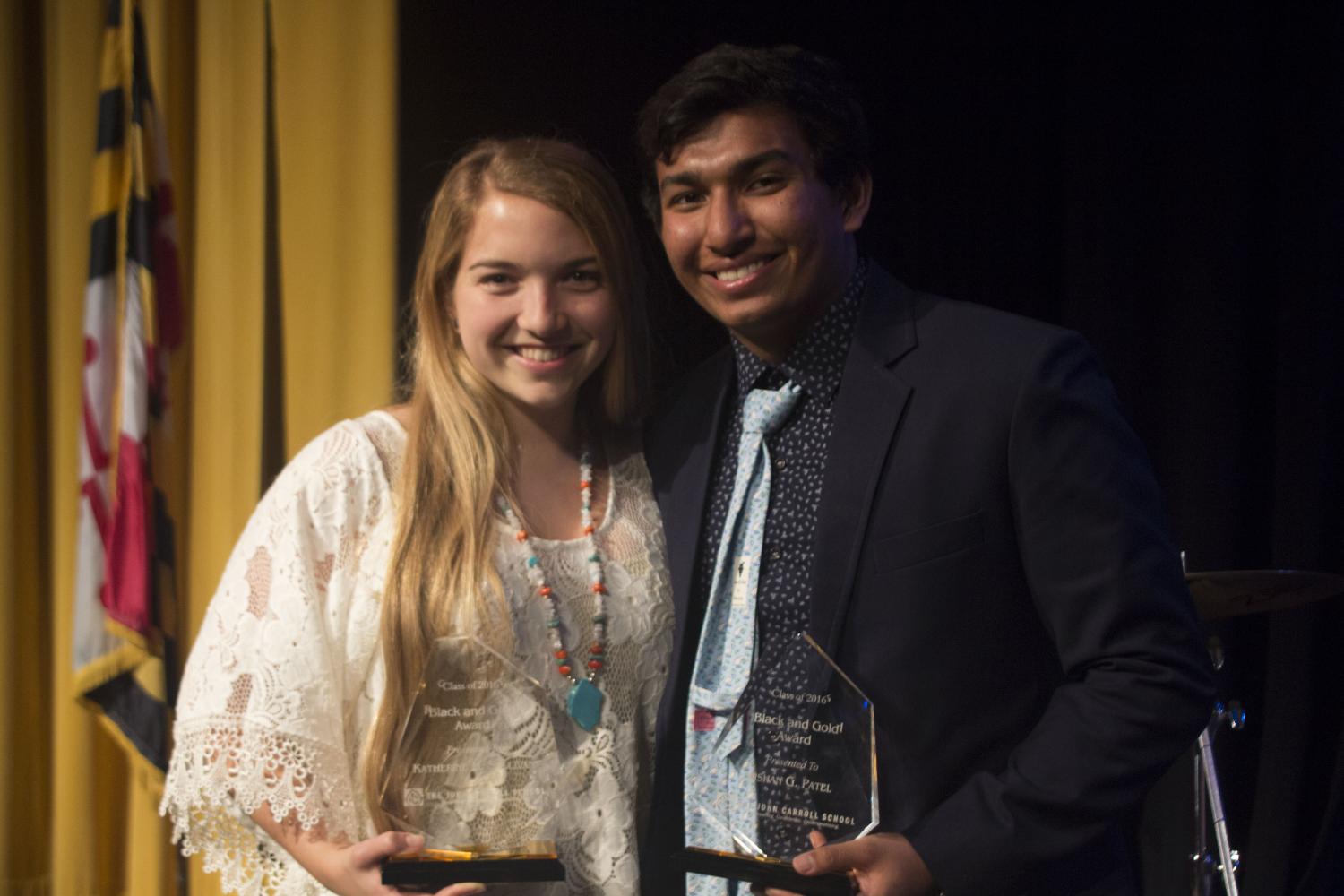 Katie Sullivan and Kishan Patel, class of '16, pose with their Black & Gold Award, which is presented to one male and one female student in the graduating senior class. This year, the nominees are seniors Caroline Cooney, Emma Gromacki, Pia Scotto, Emily Stancliff, Edward Benner, Nicholas Hinke, Caleb Olsen, and Daniel Robinson.

On April 6, Vice Principal for Academics Gary Scholl officially notified candidates of their nomination for the Black & Gold Award.

Each year, the Black & Gold Award is presented to one male and one female student in the senior class. This is regarded as “the highest overall honor that is bestowed on a graduating senior at The John Carroll School,” according to a Veracross notification and an email sent out to the senior class by Senior Project Coordinator Louise Geczy on March 19.

The nominees were notified of their status individually by Scholl. “Mr. Scholl called me into his office and told me, but I was kind of scared at first because it was an ambiguous summoning, and usually at this time of the year you do not get called to his office unless you’ve really messed up,” Olsen said.

According to the notification sent out by Geczy, the only quantitative criteria for the Black & Gold Award is that finalists must be in the upper 50 percent of their class in respect to academic rank. Apart from that requirement, nominees are voted upon by their peers according to their accomplishments, attitude, and commitment.

One difference this year in the Black & Gold selection process is that teachers nominated one male and one female student in addition to the three nominated by the students. “The criteria is the same whether the teacher vote of the students vote,” Scholl said. “This new approach was at the request of the faculty so that they had some say in the nominees.”

Robinson notes that he was proud to be nominated. “It’s been something I’ve had on my mind for a couple of years. I’m very happy [to be nominated], and I was honored because I know it’s a prestigious award that lives on forever,” he said. “I was also grateful that the teachers and students recognized me as someone who fit the model of what a JC student should be.”

Another difference this year was the timing of the nominations. Nominations took place during Senior Retreat, where seniors who felt strongly that friend or classmate deserved the award could speak on their behalf. All seniors then voted for three male and three female students.

Previously, nominations took place during a senior class assembly that reviewed information about class events, such as Prom, Baccalaureate, and graduation, which take place in the final two months of school. However, according to Scholl, the number of speakers at the assembly would have limited time allotted to Black & Gold nominations. “We thought it was a nice way to end retreat so that it gives people proper time and sets them off with the right frame of mind,” Scholl said.

While Scotto is excited to be nominated, she was touched by the process of nominations itself. “Hearing the nominations really stuck out to me. It wasn’t just the list of activities but the fact that [speakers] could attest to what other people did,” Scotto said.

Scotto believes that the nominees earned the attention of their peers more through their character and personality than through their class involvement and activities. “You can do every club and extracurricular, but it’s the character that sticks out,” Scotto said.

Olsen thinks that the Black & Gold Award is not only a reflection of individual character but also a testament to the moral uprightness of those around him. “Winning [the award] would really, to me, just be a fantastic way to show my parents and teachers that they led me down the right path and that they did their job with flying colors,” Olsen said.

Though Scotto believes that all of the nominees are deserving of the Black & Gold Award, she hopes that she will win it. “[The award] reminds you of all the good times you had and all the friends you made. It’s not just about having your name in the books,” she said.

Paige Alban and Ianna Pirozzi are In-Focus Editors for The Patriot and jcpatriot.com.