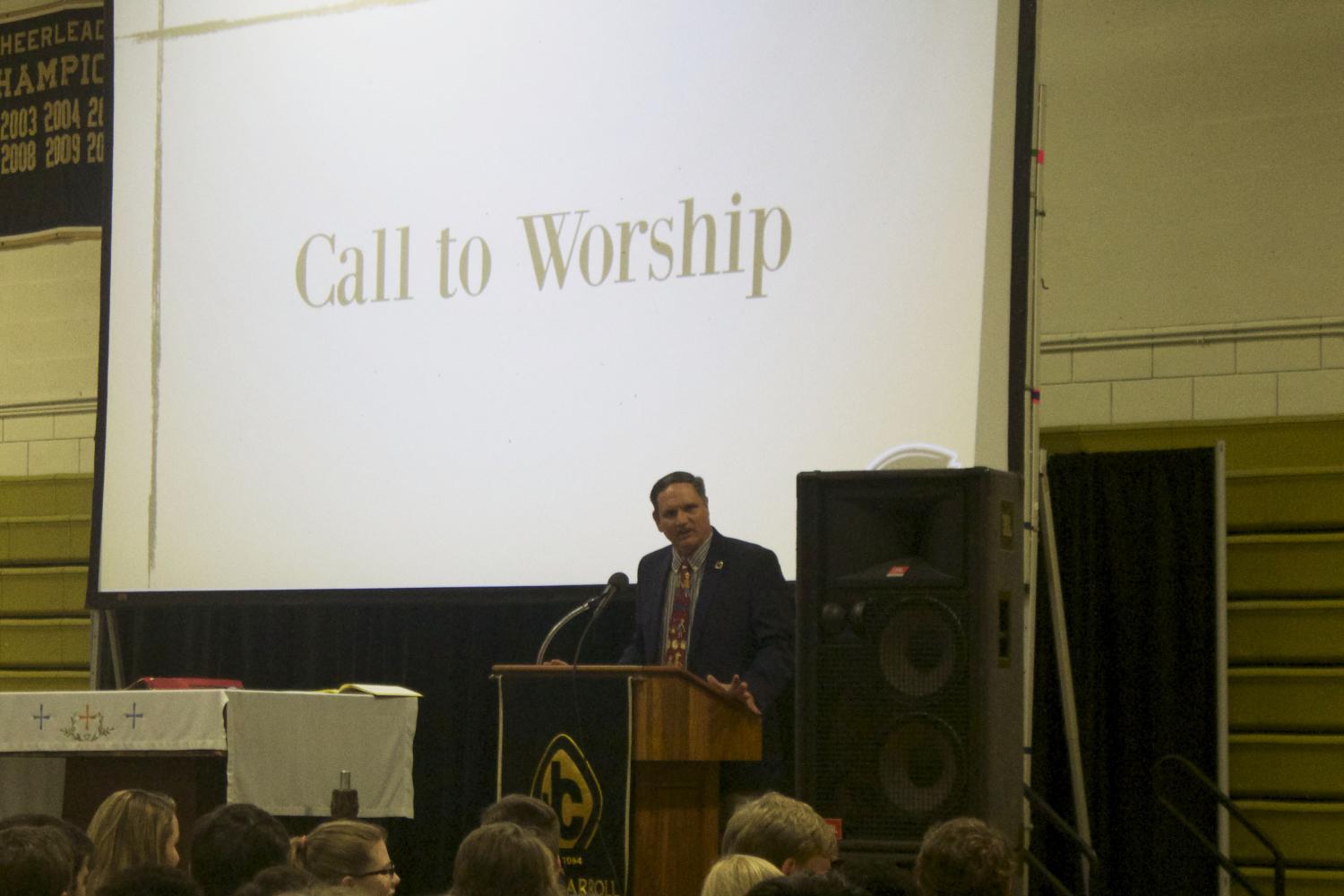 Campus Minister Gary Meyerl addresses the student body during the End of the Year Mass on April 28. Meyerl has decided to leave JC after this school year and will fill the role of Director of Outreach at Cardinal Gibbons High School in Raleigh, NC for the 2017-18 school year.

Campus Minister Gary Meyerl recently announced that he will not return to JC for the 2017-2018 school year. Instead, Meyerl plans to become the Director of Outreach at Cardinal Gibbons High School in Raleigh, NC., the school he graduated from.

According to Meyerl, he was approached by the principal of Cardinal Gibbons and offered the position. The timing of the offer made Meyerl’s move to Raleigh possible. “With [my daughter] Sarah graduating this year, it seemed like the right time to make that kind of move,” Meyerl said.

Meyerl has served as Campus Minister for the last three years. This position includes preparing and organizing retreats, liturgies, service coordination, and morning prayer and announcements.

“Outreach is done at Gibbons in a very different way than it is here, there’s no paper chase. Service to the community is a requirement, but it’s not about collecting hours. The school has made a commitment that service is important enough that we need to allow our students to do it during the school day,” Meyerl said. As a result, students fulfill their service requirement at Cardinal Gibbons through service trips during the school day. Students are still responsible for any school work they miss during the day.

While coordinating these service trips, Meyerl will spend each school day working with groups of 12-15 students. On each day of the week he has a different responsibility.

Through this process, Meyerl will meet all 1,400 students at Cardinal Gibbons by the end of the 2017-2018 school year.

While he is looking forward to the opportunity to meet every single student at St. Cardinal Gibbons, as well as work alongside of his former teachers, students, and colleagues, Meyerl will be missed by the JC community.

Beyond his current duties as Campus Minister, Meyerl also serves as a Dorm Supervisor. His fellow Dorm Supervisor Tucker Snow believes that the structure of dorm life will be different after Meyerl leaves. “The kids call him the ‘Dorm Father.’ He provides the experience of being an actual parent to these kid,” Snow said. “It will be interesting to see how they take to a new person in that role.”

Meyerl also serves as a co-advisor with German teacher Mark Canter. Meyerl moves to a different advisory each year to help assist new teachers with their new advisories. Students who have had Meyerl as an advisor believe that his absence will have a significant impact on the community.

“Students will miss him a lot and all the laughter and positivity that he brings,” senior Esther Peters, who had Meyerl as an advisor last year, said.

It is unclear if Meyerl will be replaced next year, but he hopes that someone will be hired to assist Campus Minister Zac Ufner and provide the same amount of services to students as they currently do with two campus ministers.

Grace Mottley is the Assignment Chief for The Patriot and jcpatriot.com.