A U.S. flag hangs from the remnants of a fire-ravaged home on Willowview Court in the Coffee Park neighborhood of Santa Rosa, Calif. on Wednesday, Oct. 18, 2017.

Dr. Kevin Miller anxiously gazes out the window of Northbay Medical Center in Fairfield, Calif. The skies are dark with smoke and ash, as just five miles away the earth is enveloped in an inferno. Patients and doctors worry if they will need to evacuate as the flames inch closer.

For other residents in California, those flames did inch close enough, displacing around 100,000 residents. According to CNN, there are about 16 large wildfires that have burned through 217,000 acres of land and destroyed around 5,700 structures.

Although the fires span across all of California, they have burned the most acreage near Santa Rosa in Sonoma County. This inferno has claimed an estimated 42 lives and has forced thousands to be admitted to nearby hospitals, where doctors such as Miller work endlessly to preserve the lives of those affected. These fires make up some of the deadliest natural disasters in Californian history and are expected to top $3 billion in damages.

On the other side of the country, senior Isabella Brooke expresses her concern for Miller, her uncle. “He is a surgeon there and I’m worried for him because he is very headstrong sometimes. He probably wouldn’t leave until the very last patient has left the hospital, even if the situation got deadly,” she said. People like Miller are helping to mitigate the pain and anguish caused by the fire and are assisting those in dire need. 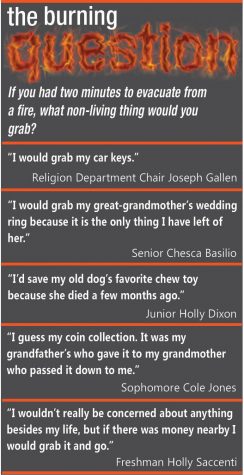 As casualties flood the hospitals, firefighters combat the inferno, despite the difficulties. Patrick Luft, class of ‘16, is studying to receive a fire science and technology degree. “Wildland fires are some of the hardest to fight … It is very hard to control once the fire has covered a large area. The resources needed to fight these fires are also hard to get, and you don’t want to take too many resources away from other areas,” Luft said.

These fires, however, necessitate the extra resources. Amanda Ellis, a freshman at Chapman University and a Baltimore County resident, discovered this after she evacuated from her college’s campus in Orange, Calif. to Malibu because of the smoke from the Anaheim Fire.

The smell of smoke has also infiltrated the dormitories through the central air conditioning system. “The common areas like the hallways and lounges were worse than my room because my dorm building has individual AC units in each room. Some people have central AC in all parts of their dorm building though, so it smelled really strongly,” Ellis said. When Ellis evacuated, the fire was five miles away and zero percent contained. Further north, the Atlas Peak Fire has threatened the hospital where Miller works, as well as the lives of the people in it.

“The fire was close to five miles away from the hospital where I work,” Miller said. Many of the burn victims, however, do not go through this hospital. They are usually transferred to the St. Francis Hospital Burn Unit in San Francisco, where they can be treated more effectively.

Personally, Miller was concerned for the safety of his house and for his family. “My family had a contingency plan to evacuate if we needed to, but we were lucky,” Miller said. The area where Miller lives is 18 miles south of where the Atlas Peak Fire was burning, and because of this, he and his family had to take precautions. “[There was] lots of smoke, and we kept the windows and doors shut for the whole week,” he said.

Like Miller, Ellis has also experienced the effects of the smoke and ash. “The smoke was really bad. It burned your eyes and throat when you went outside and most people were covering their faces with something. I know a lot of people who had to take out their contacts and stuff because of all of the ash falling in their eyes,” she said.

The scale of these fires can be caused by many factors, as AP Environmental Science teacher Angela Ward explains. “A wildfire is usually fueled by weather, wind, and dry conditions. Obviously when it starts, it takes off and spreads. Since the fire grows larger and larger, it becomes particularly difficult to contain,” Ward said.

According to Ward, the resulting fire and smoke can have detrimental effects on the ecosystem. “It depends on which areas. If it totally wipes out the animal’s habitat, the animal could die. Plus, the fire itself will kill many animals who are caught up in it. The conditions we saw from the recent hurricanes are similar, so there is no way for the animal to survive. Once it’s over, it will be all charred and burnt. Many animals will migrate and move away from the fire,” she said.

Although the fires have devastated people and animals across California, they have also inspired people, such as Luft, to pursue careers in the field to learn how to effectively contain wildfires before they start. “They have helped me want to learn more about wildland firefighting. Since firefighting is so different across the country, it’s interesting to learn how the West Coast does it compared to how it is done on the East Coast,” Luft said.

The fire seems to be calming down, as the weather has finally taken a turn for the better. Rain began falling the morning of Friday, Oct. 20, assisting the firefighters in combating the flames.