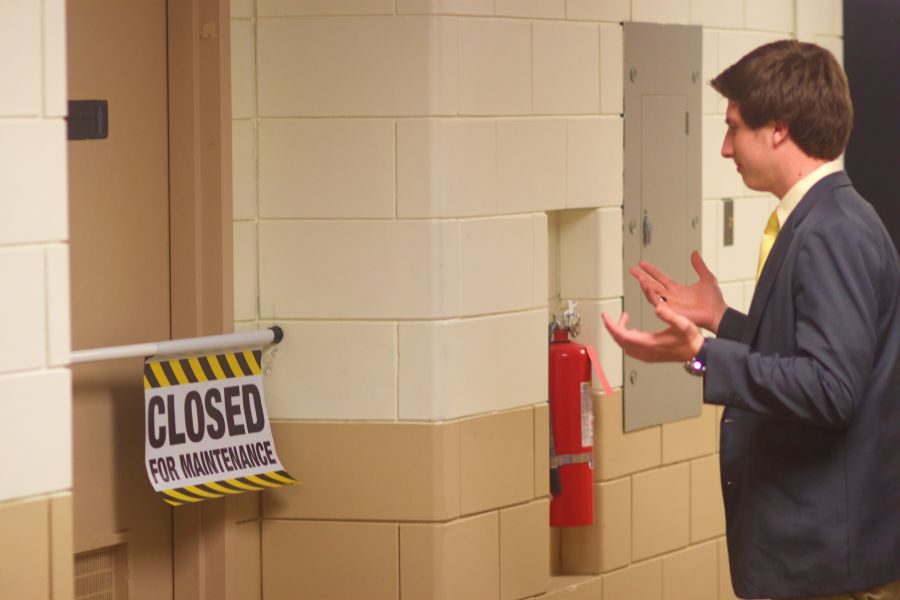 Senior Brandon O'Neill stands surprised that the men's second-floor bathroom is inaccessible. The bathroom was closed from Tuesday, Oct. 31 to Tuesday, Nov. 7.

Junior Carson Bredesen waits for a break in his teacher’s lecture, desperate to use the bathroom. When he is finally allowed to leave, he rushes down the stairs. Arriving at the second-floor restroom, he is greeted by a “closed door” sign. Hurrying, Bredesen makes his way to the first- floor restroom.

Principal Tom Durkin says there are several reasons for the closing of the bathroom. “First, we have found out that students are vaping and there is evidence of them vaping. Also, there was a toilet and plumbing that might have had a possible leak, and we want to prevent any damage being done,” Durkin said.

However, the maintenance staff reports an additional reason for why the bathroom was closed. “Someone made a mess with a pumpkin in the toilet,” Day-Time Cleaning Supervisor Brittany Jones said.

Male students were forced to use the first-floor bathroom or the lobby bathroom if they had to use the restroom.

As soon as Dean of Students and Technology Brian Powell took off the pipe and sign, students were free to use that bathroom.

However, there are still parts of the bathroom that do not work. Three of the sinks in the men’s second floor bathroom are broken and do not work. The other two sinks in that bathroom only partially work. Depending on the day, none of the  sinks will work at all. Another problem that has not been solved is that the first and last stalls in the bathroom that are closed for maintenance. The administration has not announced why those stalls are closed, but they have put up the same “closed for maintenance” signs on each of the closed stalls.

Ryan Griffin is a Perspectives Editor for The Patriot and jcpatriot.com.