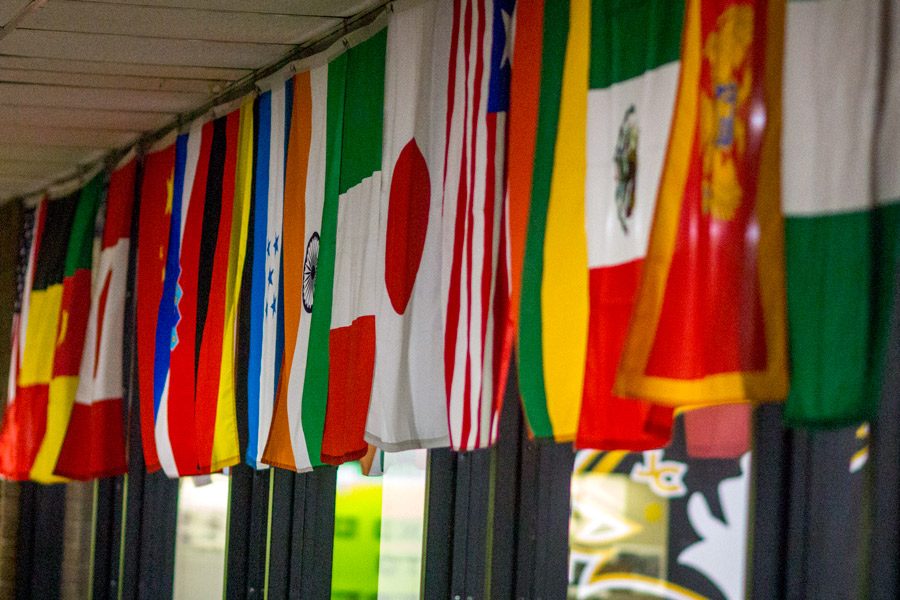 Flags hang outside the cafeteria, representing countries from around the world. The Model United Nations Club will represent these various countries on a mock panel in February.

This year, eight students, along with Campus Minister and religion teacher Zac Ufnar, created the Model United Nations club. According to Ufnar, the club’s main purpose at this point in the year is to practice and address the skills needed for their conference that will take place in February.

The Model U.N. club is meant to create an “authentic simulation of the U.N. General Assembly, U.N. Security Council, or other multilateral body, which introduces students to the world of diplomacy, negotiation, and decision making,” according to the United Nations Association of the United States of America website.

The purpose of the Model U.N. club from a JC perspective is to develop public-speaking skills and learn how to run a parliamentary procedure for the conference, according to Ufnar. “The unique thing about Model U.N. simulation is that there is no clear winners or losers, it’s about being able to build a consensus and working with other nations and students,” Ufnar said.

The numerous behavioral benefits have attracted eight students. “I joined Model U.N. to improve my communication skills and learn more about the world, the problems we face and how we can work to solve them,” junior Garrett Frankis said.

Participants in the club are given the chance to roleplay as ambassadors of countries that are apart of the U.N. These students call themselves “delegates,” and debate current worldly issues with one another and then proceed to figure out ways to fix conflict.

“The main thing it’s centered around is a Model U.N. conference run by Johns Hopkins University. This is one of many conferences, and this is the one we will attend for our first year. Students at Johns Hopkins facilitate the entire conference,” Ufnar said.

Although club members have formally met a few times, they will join as one unit and travel to the Inner Harbor in Baltimore for the conference which runs from Feb. 8 to Feb. 11. During this time, they will spend four days meeting and discussing worldly issues with students their age from other schools. “I am excited to represent our country in the February conference. I look forward to demonstrating my public speaking and negotiation skills among the other delegates,” Frankis said.

According to the United Nations Association of the United States of America website, Model U.N. delegates learn how the international community acts on its concerns about peace and security, human rights, the environment, food and hunger, economic development, and globalization in the process of writing these essays.

The Model U.N. club has drawn student interest in the past, and Ufnar is glad to help develop the club. “I have a great interest in geopolitics and the type of skills that go into being successful. Experiencing that type of simulation is unique,” Ufnar said.

Students who have joined this club have been eager to kick start the club since the end of the last school year. “I was eager to join Model U.N. because the club gives members a unique opportunity to research countries around the world and participate in a diplomatic simulation,” Frankis said.

Paige Alban is the co-Editor in Chief of The Patriot and jcpatriot.com.