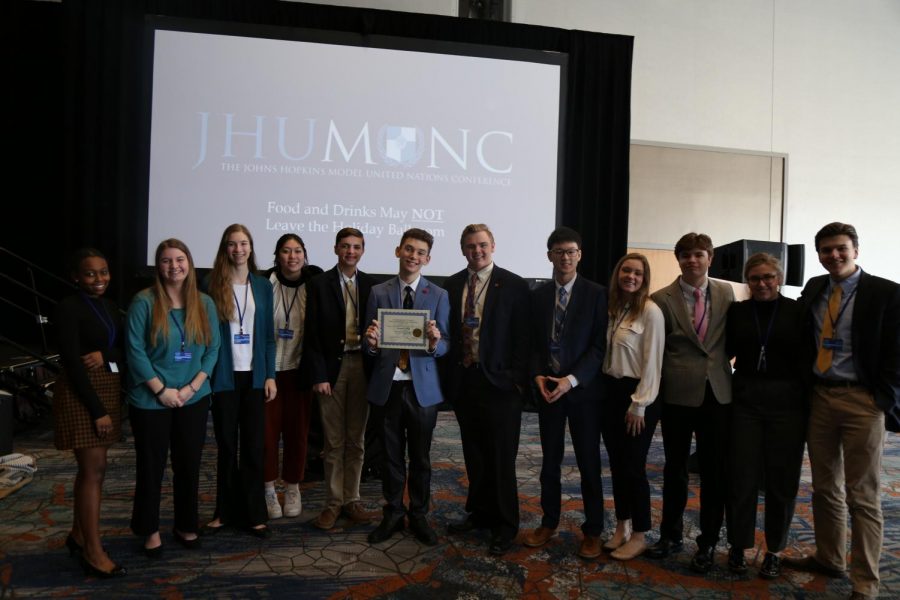 Mr. Ufnar said the conference overall was, “wonderful.”  He added that it was “uplifting and inspiring to hear students talk about the world affairs.”

Mr. Ufnar remarked that he “wouldn’t change anything” about their trip to the conference.

Students were a part of committees at the conference along with students from all over the world.

Model UN is an extracurricular activity in which students typically role play delegates to the United Nations and simulate UN committees.

The Johns Hopkins conference offered over 15 committee groups which were  all designed to create critical debates so that delegates would leave with the experience necessary to become  great scholars.

Dean Eliot Cohen was the keynote speaker at the event. Currently the Dean of the Johns Hopkins University’s Paul H. Nitze School of Advanced International Studies, he is skilled in politics and has experience with governmental policy.

Sophomore Stephen Snyder said that he, “enjoyed debating his fellow delegates at the conference and learned a lot.

Senior Leo Hojnowski, one of the team’s chairs, received the title of “Outstanding Delegate” for his excellent work while performing at the conference.

He explained that the conference, “was definitely a fun time with a lot of huge events happening”

One of the events he mentioned was, “being woken up at 1 am to respond to an emergency crisis to leading a military coup.”

In addition to the JHUMUN conference, delegates attended a Model UN conference at Calvert Hall.

Freshman Anna Denver and senior Leo Hojnowski both won awards at this event.