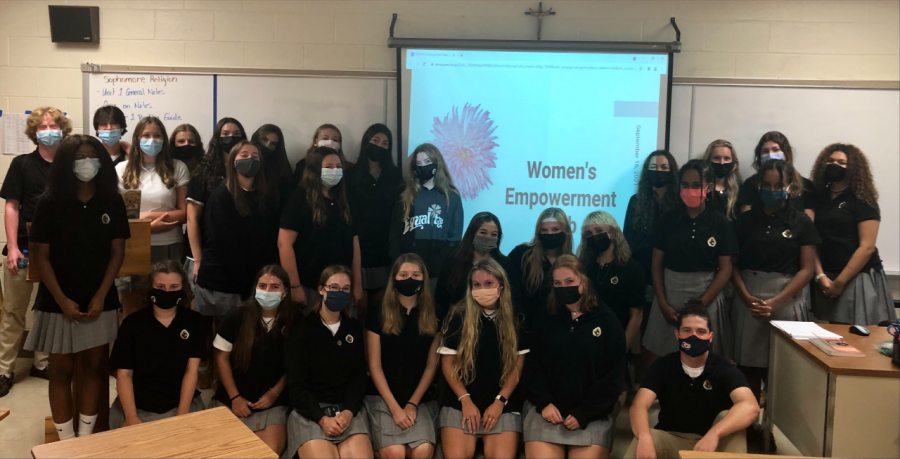 The Women’s Empowerment Club, a brand new organization at JC, met for the first time on Thursday, September 17.

The club was founded by JC students. The moderator is Religion Teacher Kenneth Goedeke.
“I was hesitant at first [about being the moderator]. Being a male teacher, I wasn’t sure if I would be the most effective moderator, but then I thought, why not?” said Mr. Goedeke.
Mr. Goedeke added, “As a religion teacher, it is a primary goal of mine to teach our Catholic faith. At the core of that faith is the truth that we all are created in the image and likeness of God, and that every person is equal in dignity. A club that tries to empower women to recognize that dignity and work towards creating a society that uplifts the equal dignity of women is not only something that I can support, it should be something that [is] on the forefront of our mission as a Catholic school.”
The recent interest meeting occurred in Mr. Goedeke’s room with a large number of students showing interest in the club.
Junior Chloe Davies, one of the club’s student founders, said, “At our first meeting, 27 people showed up, both females and males, and multiple people told us that they wanted to join and just couldn’t make it that day.”
Mr. Goedeke added, “The first meeting turnout was overwhelming. We filled the classroom, and some people had to stand in the back due to the lack of seats. The energy in the room was inspiring as well. So many young women (and a few young men) in our school are energized by this club.”
Chloe commented, “The goal of the Women’s Empowerment Club is to inform members of the John Carroll community about women’s issues and to promote gender equality. We want to empower females to stand up to societal roles and stereotypes so they can take charge of their own future and create a better world.”
The club was created to provide women with service and fundraising opportunities to show support for women who are less fortunate.
Mr. Goedeke said, “The rights of women are still undermined and violated. We often think that history has ‘taken care of’ the issue of women’s rights. We are still not there. Women are still victims of domestic abuse in numbers that are tragic. Women still struggle to receive equal pay for equal work in many institutions and companies. Even Sacred Scripture continues today to be used to subjugate women by misinterpreting and misapplying the texts of the Old and New Testaments in a way that falsely promulgates a faith that sees women as inferior to men. There is no better time than now to shine light on these injustices and work to promote a better, more inclusive culture.”
Students in the club are able to look forward to many volunteer and service opportunities in order to benefit women all over Maryland,
“We’re planning on our first event being a drive for feminine products and other necessary hygiene products for women’s shelter[s], possibly through HerDrive. We would also like to hold fundraisers for women negatively impacted by sex trafficking and domestic violence,” said Chloe.
Other than volunteer and fundraising opportunities, the club also will include opportunities for students to pay support to women affected by violence.
“Other ideas include marches to show support and fundraise for impacted women and/or vigils to show support and honor the memory to women who have passed away due to some type of violence,” Chloe continued.
Students at JC are also very excited to participate in the Women’s Empowerment Club.
Junior Izzy Cole said, “I feel excited to be a part of such an amazing group of people on campus. I’m looking forward to the many events the club will be planning and doing to support women’s empowerment.”
Students who wish to participate in the Women’s Empowerment Club are welcome to come to the next scheduled meeting after school today on Thursday September 30, 2021.