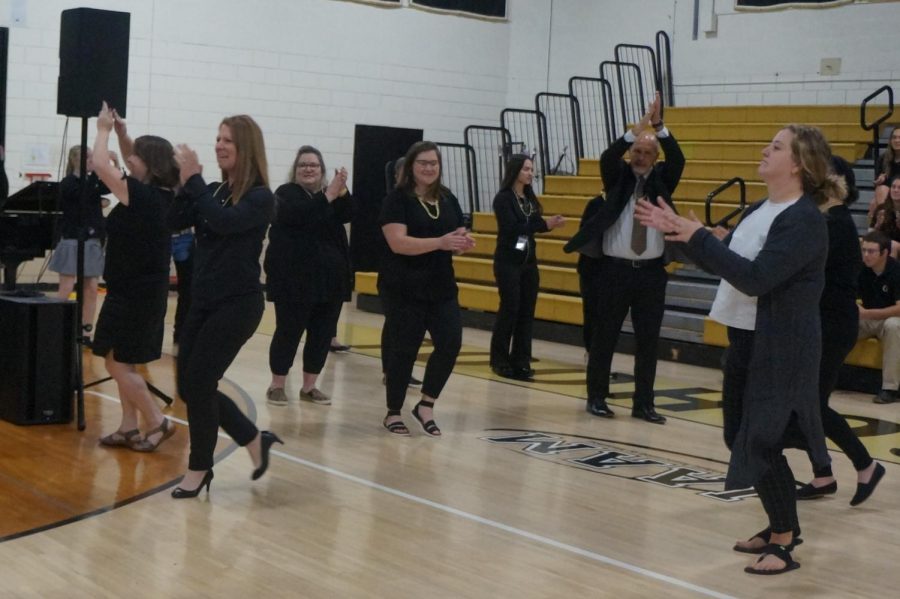 JC’s first ever talent show, JC’s Got Talent, kicked off the 2022 Patriots Week. Students and faculty gathered in the Upper Gym on April 25 to watch their peers share their talents.

English Department Chairman Matthew Blair introduced each act before they took the stage. His introductions were followed by sophomore Connie Fritz’s whip cracking. Connie had her own segment at the end to show off some more of her whip skills.
Many Patriots flaunted their musical talents at the show. For the show’s first act, sophomore Al Riska performed a piece called “Etude in G Minor Op. 72” by Mortiz Mosckowski on the piano.
Senior Jillian Connolly and sophomore Brooke Hoskins performed “Don’t Look Back in Anger” by Oasis. Their singing was accompanied by Jillian’s ukulele playing.
Additionally, sophomore Maya Millsape sang a modern but soulful version of Lauren Hill’s “Killing Me Softly.”
JC’s rock band performed “(Don’t Fear) The Reaper” by Blue Öyster Cult. Lead singer Caden Daubach sang while playing guitar, and Kay Lani Morgan sang and played keyboard. They were accompanied by Dan Graber on the bass and Andrew Cox on the drums.
After the rock band’s performance, senior Gabby Spencer sang an original song called “All Grown Up” while junior Caden Daubach played guitar. A talented and experienced songwriter, Gabby wrote the song in one week. The song contained heartfelt lyrics about growing up and beginning a new chapter of life.
Senior Gianna Houck showcased her baton twirling skills in a routine to a music-mashup remix. Gianna’s performance included many difficult spins and tricks.
Students were not the only ones who shared their talents on stage; teachers were encouraged to perform as well.
Math Teacher, Kimberly Cadle, sang “The House That Built Me” by Miranda Lambert along with senior Paul Huynh on the guitar. Later, Religion Teacher Michael Kimble played guitar and sang “I-76”  by G. Love and Special Sauce, an ode to his hometown of Philadelphia.
For the final act, teachers shocked students as they made their way to the front of the room. Mrs. Alyson Shiflett led teachers and staff in a choreographed dance to “Let’s Groove” by Earth, Wind, & Fire.