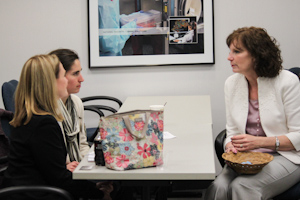 Bioengineering major at the University of Maryland Imani Sanders repeatedly told her small group that she knew the answer to the problem their professor had just given them. Her group, consisting of all males, ignored her and continued to work out the problem amongst themselves. When the professor stated the answer, Sanders was right. “I just represented female engineers in that moment,” she said.

Sanders was just one of the nine women on a panel at a STEM outreach event, Women Inspiring Innovation Through Imagination, held at the Battelle Eastern Science and Technology Center in Aberdeen. Twenty-three JC girls attended the discussion on March 15.

According to science teacher Courtney Hugo who attended the field trip, “it was a very simple thing for us to do, and I think it will pay huge returns for the girls who went.”

“The primary objective of this event is to inspire the imaginations of young women to seek a STEM career, thereby enhancing and expanding the future STEM workforce,” Nikitas said.

With March being Women’s History Month with a nation-wide theme of women in STEM, Nikitas believed this would be “a perfect opportunity” to provide young women with an in-depth look into a male dominated domain.

Most of the women on the panel, whose occupations ranged from a chemotherapy nurse to a microbiologist discovering new ways to decontaminate anthrax bacteria, belong to women’s networks. The panel took shape through these networks. “We all share the same desire to pay it forward. If we share our experiences and knowledge to educate and empower you all, you’ll be in a position to do the same,” Nikitas said.

A message that all panelists honed in on was to find a job that you enjoy, even if you find it after having kids, as two panelists did. Dr. Theresa Huwar stressed that your professional life is not a paved course. “It’s a career path,” she said.

Senior Susie Snee took note of the many different paths some of the women have taken. “I couldn’t believe how many different twists and turns it took each of them to get where they are now. However, it was very comforting to know that you’re not always going to be right, but if you follow your heart and try your best, you will find a job that you love.”

The young women in attendance got a chance to mingle with the panelists following the panel discussion, asking them questions relating to specific fields. “I think it was great that they could talk with so many [professional women] because they could see that not every path to success is the same,” Hugo said.

They panelists reiterated the importance of making connections with other women in the male dominated STEM field. “As women, we do want to help other women in the field,” Vertex Manager of Software Test Engineering Lois Reynolds said.

“We’re happy to help you beyond the three hours that you’re here today,” Nikitas said.

“I thought the Battelle field trip was an invaluable experience for our girls … some of the girls made some connections for possible shadow days,” Science Department Chair Julie Baker said.

The idea of women in the work place has changed over time. According to Reynolds, when she was younger, parents “felt a woman only went to college to find a husband … the world is different now.” Despite this, however, she is “not seeing enough women in the field. We want to see that trend change.”

Freshman Alice Cumpston believes this panel discussion will help change this trend. “I felt the trip was very inspirational and motivating towards the girls to pursue careers in any type of science field.”

Women are not seen as much in STEM oriented majors either. According to Sanders, there are only about 10 to 11 girls out of 80 students in one of her classes.

“It’s not something growing up that they really talk to females about … I think when you’re a girl, they just throw a doll in your hand rather than a hammer or wrench,” chemical engineer Monica Malhotra said. “It’s important to expose young women to the fields of science.”

“Companies are realizing if you have a diverse mix … everybody brings something to the table,” Nikitas said.

That being said, the panelists had career advice for the young women attending. Most of them urged the young women to take opportunities that arise and to not be afraid to be open to what the world has to offer.

“My hope for the future is that you all will continue to be inspired,” Nikitas said. “As you climb the ladder professionally, don’t forget to look back and help the women who helped you.”

Kailey Tracy is the Copy Chief for The Patriot and jcpatriot.com.