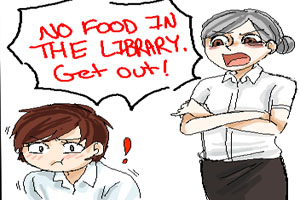 This is it. Senior year. The year of privileges.

Too bad the privileges were taken away before they even started.

All summer I had been looking forward to this year, and the many privileges that seniors receive. One privilege that I specifically longed for was the use of the senior classroom.

In the beginning of the year, I enjoyed using the senior classroom to eat lunch and escape the cafeteria for a mod.  It was a place where I could actually hear my friends speak.

With recent changes involving the library, the privilege of eating lunch in the senior room has now been taken away.  I find this change to be unfair to the class of 2012, because the senior class before us has had the opportunity  of using the room and spending their time in there however they pleased.

Why change it this year? There should be no reason to change a tradition that has been a part of JC in recent years.

The new changes of the library as a whole irritate me as a student.  The concept of students being forcedto leave the library at the end of each mod is a hassle.  It’s unfair to turn students away at the door who wish to study during several mods.

The idea of having to pack up in the middle of a study session and then return four minutes later and resume studying is senseless.   Like other students, sometimes I only have one mod off and want to get homework done or study in a
quiet area while eating lunch.  With the new changes, I’ll either have to skip lunch for the day or be unprepared for
class.  While studying should be done at home, many students rely on the library and its resources to finish work.

I feel as if the librarians are putting more work on themselves.  It is imprudent to not let students print in between classes, especially when some students don’t have compatible printers at home with their school laptops. It’s hard to be prepared for class when you’re denied the right to printyour homework if you don’t have a pass.

While the new changes may have been created with good intentions, in the long run, it simply won’t work.   I’m giving these new changes a month. If it lasts longer I’ll be shocked.

Megan Battaglia is a Multimedia Editor for The Patriot and jcpatriot.com.