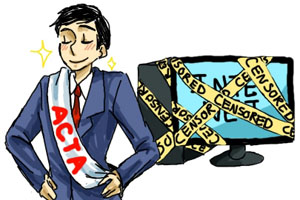 The Stop Online Piracy Act (SOPA) and the Preventing Real Online Threats to Economic Creativity and Theft of Intellectual Property Act (PIPA) have been dodged for now, due to the public outrage that they produced.

But let’s not get too hasty with the celebrations, dear Internet surfers.

I introduce to you the Online Protection and Enforcement of Digital Trade Act (OPEN) and the Anti-Counterfeiting Trade Agreement (ACTA).  The latter has already been passed.

Seeing Congress push for more bills on the same exact issue of online piracy just fills my heart with joy.

There are a million other problems they could be occupying themselves with, such as ending world hunger, government oppression, poverty, or the environmental decline of the planet, just to name a few.  No big deal, right?  All of those poor toddlers working in sweatshops for less than five cents a day to produce Wal-Mart products can wait while we go chase out those online pirates.

Please, Congress, get your priorities straight.

The ACTA allows people to have their electronic devices confiscated or destroyed, and a hefty fine and even jail time can be put on the person if they are found to have illegally downloaded materials.  Also, new additions to the ACTA suggest that Internet service providers should be required to hand over the personal information of an alleged internet pirate.

I get it, stealing is wrong, but whoa there.  You can’t just invade someone’s privacy and imprison them for that bootleg version of the latest movie.  I mean, how embarrassing is it to see the US imprison people for internet piracy while Casey Anthony is still straight up chilling and releasing video blogs about her new pet puppy.

If Congress is so persistent in doing something about online piracy, I can see that the OPEN Act is a step in the right direction.  The OPEN Act is not as harsh of an act as SOPA or PIPA, and corporate Internet giants such as Facebook and Google have given it their stamp of approval.

However, the only reason why these Internet corporations have done this is because the OPEN Act is so lenient on piracy, the very thing it wants to destroy.  According to Corey Wiliams of the American Library Association, the OPEN Act’s way of enforcement would be simply cutting revenues for a website that pirates are using.  This is as opposed to SOPA’s and PIPA’s solutions of allowing lawsuits, blocking website access, and encouraging advertisement services to cut themselves off from that website.

SOPA and PIPA would also force the United States to join 13 other Internet censoring countries in the world (keep in mind that North Korea does this kind of stuff), and increase companies’ incentives for Internet user surveillance (they’re watching you).  It would also cut off services to independent website users (say bye to your fashion blog), and stops you from accessing foreign websites and processing payments to other countries.

According to Search Engine Watch, Wikipedia, Mozilla, Vimeo, Tumblr, and Flickr are a few big names along with Facebook and Google that have raised the red flag towards this bill.  Even WordPress, the company that produces our beloved online newspaper, is not a fan.

So back to my main point: OPEN Act does none of this – yet.  And hopefully it never will.  But at the same time, even if it never reaches that point, we should wonder what the point of all of this is.

Good question.  I can answer it for you right now.

There isn’t a point.

Corporations like the OPEN Act a lot so far, and Internet users, such as myself, are agreeing, but come on.

Congress really just needs to table everything related to Internet piracy for now.

Yes, again, it’s a bad thing to steal videos and songs, but do they really thing that a celebrity in their multi-million dollar mansion somewhere in California going to throw a hissy fit because you downloaded their latest single off of 4shared?

These Internet acts are going to cause nothing but more trouble.

They’ll be stripping us of our rights, messing up Internet corporations, blocking our favorite social networking sites, censoring the Internet, and taking away more than what is being gained through the passing of these acts.

Everyone who isn’t living under a rock knows that the Internet is used every day.  So, you must be asking yourself frantically, “Wait.  Despite the alternative Open Act, SOPA and PIPA have not been officially voted off the island yet.  What can I do to help Congress wake up and smell the coffee?”

Well, no one expects you to storm into Washington D.C. and violently protest, however, you can sign Internet petitions and anti-SOPA/PIPA movements sponsored by Internet sites such as Google, Facebook, and Avaaz.org.  Avaaz.org has already sent out 1.25 million signatures to the White House.

Get informed and stay alert.  Simply being educated about these bills and ready to spring into action should these bills come up again in the future is the best medicine you can administer for now.  In the meantime, keep calm and Internet on.

Grace Kim is the Online Chief for The Patriot and jcpatriot.com.