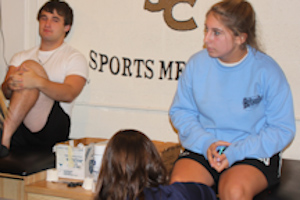 Although concussion awareness has grown in past years, the number of concussions in the athletic world has still been very high. With approximately ten concussions since school has started, there has been more than one concussion a week at JC.

Some even refuse to go to the trainer because they don’t want to sit on the bench for their respective sports.  Exercising with a concussion is dangerous, but can be prevented if a coach takes control.  As a requirement of their job, coaches should send injured athletes to the trainers immediately.

According to a study at Nationwide Children’s Hospital in Columbus, Ohio, 13 percent of high school sports injuries from 2008 to 2010 were concussions. Although concussions are twice as likely to occur in games than in practices, it still happens in practices.  Coaches need to ensure their players’ safety by being aware of them and their injuries.  Coaches must play close attention to their players’ health, not just their skills in sports. Any contact that results in even the smallest headache should result in a trip impact testing, ordered by the coach.

Coaches of every sport must realize that the safety of their players is more important than the wins. The athletes need to realize that as well. If a player hits his or her head, collides with another player, or does anything else that could lead to a concussion, the players on their team should take initiative and let their coach and trainer know that the player might be injured or concussed.

Coaches should meet with players once a week to talk to them about how they think they are playing and any injuries that have occurred that they need to have looked at. It is up to the player to be honest with them, but the coaches should have an idea about the injuries of their players.

After coaches speak with their players, they should be required to speak with the athletic trainers about any injuries, especially concussions that have occurred. They should set a time every week to meet with the trainers, even if none of their players are hurt, just so they know that everyone is healthy or that a player might have a concussion.

High school athletes are so wrapped up in the number of wins they have that they sometimes do not realize the long term effects of concussions. Post-Concussion Syndrome (PCS) is a set of symptoms that can last up to years after a concussion. According to Web MD, the symptoms include noise sensitivity, problems with concentration and memory, irritability, depression, anxiety, fatigue, poor judgment, and even short term memory loss.

The effects of PCS speak for themselves. Concussions are no joke.

Some athletes do not even realize that they have received a concussion because they are not aware of the symptoms and warning signs. The best way to create awareness for concussions and the severity of them is to inform the students, especially the student athletes. There should be either an assembly for all students for individual meetings with teams to help create the awareness of concussions, learn about the symptoms, and be told what to do if they think they have a concussion. The meeting should informative and let the athletes know that it is vital to inform the trainers about possible concussions, so they can get back on the field as fast as possible.

When concussions are reported, Erik Fabriziani makes the injured athlete retake the ImPACT test. After the athlete has been retested and has officially had a concussion according to the data from the test, he or she must take at least 1-2 weeks off of working out for their sport in order to recover.

It’s vital that the trainers know about the injury, so they can help as much as possible and get the athlete retested. The best way for athletes to recover is with the help of the athletic trainers, but that does not happen if no one reports the problem.

Meredith Haggerty is an Indepth Editor for The Patriot and jcpatriot.com