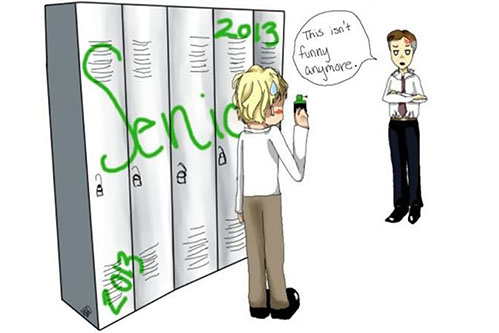 This is the con argument on allowing class pranks. To view the pro click here.

Sure, a class prank of moving all the classroom desks and replacing them with beanbag chairs seems innocent and fun enough.  But pranks can’t be taken lightly because it’s way too easy for them to get out of control.

Class pranks, more often than not, can be detrimental to class time. There’s obviously the rare occasion, maybe at the end of the year after AP testing or during advisory, where a class prank can be playful and fun.  Most of the time, in the middle of the school year, they’re just bothersome and shouldn’t be done.

For teachers who have strict curriculums to get through, especially AP teachers, class pranks during the school day can remove valuable time needed to get through the material.

Some teachers may enjoy the occasional prank, but many are extremely bothered by useless pranks that shouldn’t have been committed in the first place.   Math teacher George Appleby’s classes have been disrupted when the taking of his Mr. Potato Heads have gone too far.  Students should calm their troublesome antics in lieu of bothering teachers who have better things to do with their time than lecture students on immature behavior.

Class pranks waste time that could be used more wisely covering material.  Pranks and other fun things should be saved for the end of the year when everyone, including teachers, can relax.

In addition, students don’t often think of the repercussions of pulling a prank much further than the laugh they get immediately after.  When students graffiti lockers or windows with their class colors during spirit week, they don’t think of how hard the cleaning staff will have to scrub their mess to restore the school to an acceptable condition.

Class pranks require much more foresight than they normally receive so as to not negatively affect the jobs of those who have to clean up after students’ messes.

Though class pranks are usually intended to be lighthearted, they normally have greater ramifications than originally planned.  Class pranks waste class time and should be saved for the end of the year and executed sparsely, if at all.

Brianna Glase is the Online Chief for The Patriot and jcpatriot.com.