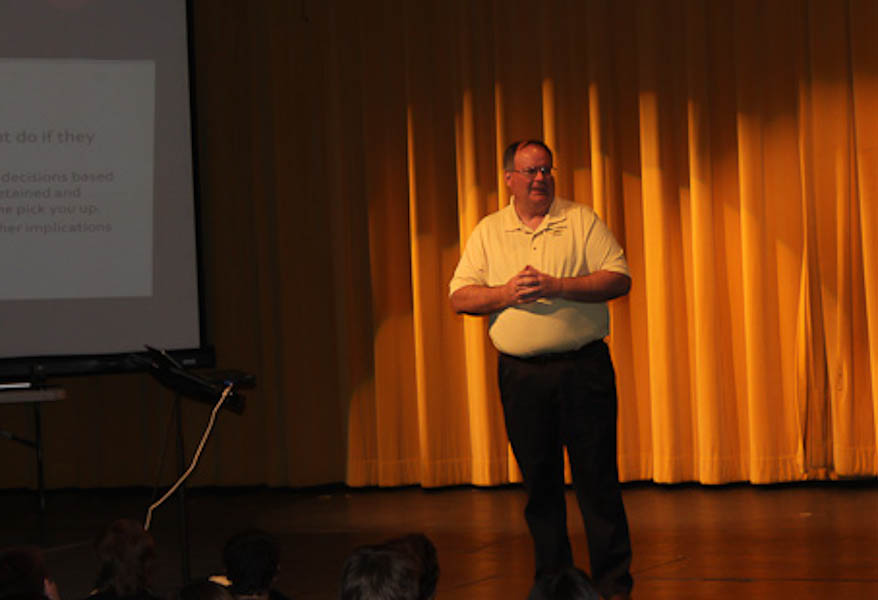 Athletic director Larry Dukes talks about law at the senior seminar on March 12. Dukes has been working at JC for the past 12 years.

On March 12, juniors, sophomores, and freshmen were able to sleep in and get a nice start to their morning. I, however, along with the rest of the seniors, had to trudge my way in at regular time for the final senior seminar. After sitting through three of these sessions, I came to the realization that the hour I could have been sleeping was actually well spent. Listening to the senior seminars gave me new knowledge that will be very useful in the world beyond JC.

The final seminar was about law and different situations that students might get themselves into. Athletic Director Larry Dukes was once again running the seminar, and I thought he did an exceptional job. In the past, JC has brought in attorneys and other people in the field of law to speak to students, but instead, Dukes simply told us the same information, which was just as effective.

For senior week, Dukes gave insight on several things that may happen to students — parties being busted, drug possession, and driving under the influence (DUI). I thought this was well done because each of the situations was not simply a “don’t drink and do drugs” speech. Instead, students were given actual advice on what to do, the consequences, and exactly how they may be implicated in certain situations.

For example, students were told that if illicit drugs are found in the their car and they are not being carried on a person, then multiple people in the car may be accused of possession and arrested. That was something I personally never knew. Giving students real advice instead of just lecturing them not to drink is more realistic and will be more useful to students entering college.

While Dukes was an effective presenter, bringing in an attorney, police officer, or some other member of the law might make the seminar more serious for students. Not that Dukes seemed unknowledgable, but it would be nice to hear from someone in the profession with more credibility. Relating some of the information given to students to real life stories would make the seminar more engaging and real to students. Math teacher Sean Connolly, who is a licensed member of the New York State Bar and coach of the Mock Trial team, might be a valuable resource for Dukes.

The senior seminar series itself was a very good idea, and I am glad the tradition has continued. As a senior at JC, I am grateful I was able to attend them, as not every school does this. They covered different aspects of things students may have to deal with once they leave JC, and it gives students valuable information other seniors may not get.

In the future, perhaps JC should give students more options on things they want to hear about and maybe even let them choose which ones they would like to hear. I am sure there are many more topics students could benefit from, and it would be nice to have the option to hear them. For example, maybe a seminar on how to adjust to life away from home or how to transition from high school to college. Overall the senior seminar series was well done, and I advise all seniors next year to not sleep through them.