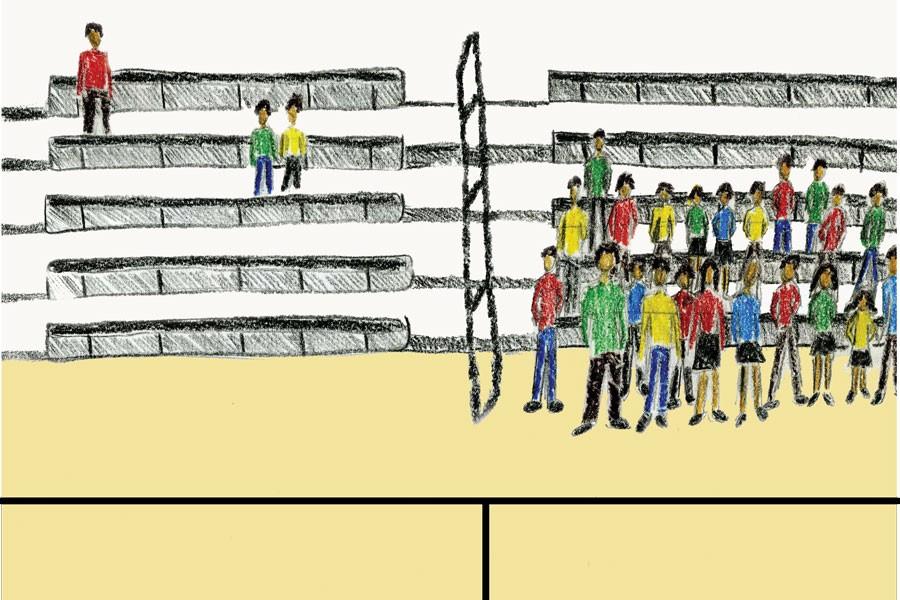 Imagine a sold out gymnasium with clapping, stomping, and hundreds of high school students chanting for their beloved school as loudly as their vocal cords let them. The energy of the building overwhelms you as you struggle to find room to stand on the bleachers that feel as if they are about to collapse at any moment.

That was the scene at local high school C. Milton Wright on Jan. 22 when our varsity men’s basketball team squeaked by and won 46-44 to remain the kings of HarCo basketball, an arrogant title we Patriots proclaimed ourselves to be.

Students stood on their feet chanting the entire duration of the game, excluding halftime. This all happened on a school night, with an indoor track meet that kept many fans from the stand. Just imagine the same atmosphere on a Friday night where students didn’t have to worry about completing a brainflex for science teacher Timothy Perry by first mod the next morning.

Facing an inter-county rival is a unique experience for both the players and the fans, particularly the student body. Usually in in-conference games most students don’t care as much who they are cheering against because we are the only private school in Harford County, but facing a county rival provides a new dynamic.

In inter-county games students can holler at the top of their lungs to their neighbors and best friends growing up. The personal relationships create a better, more competitive experience for everyone involved.

The administration is always trying to raise school spirit and bring the community together as one. What is a better example of this than having our entire student section filled and united chanting “We have Jesus” at an away game?

In a single night, C. Milton sold out a gymnasium that holds over 200 for $5 per ticket, excluding the profit from snacks. If JC hosted an inter-county game, ticket sales could go towards funding to solve our bathroom issues or help the Athletic Department. The C. Milton game was so popular that the school had to turn fans away because the gym was already too packed and tickets had been sold out for the highly-anticipated basketball game.

After the Patriots’ narrow two point victory, Twitter exploded with tweets about the game and the teams’ rivalry. The Patriot’s Twitter account received over 80 retweets of the final score. Additionally, multiple students defended our international students from the wrath of the irate Mustangs. The event bolstered school pride, uniting students in defending our school.

It is understandable that scheduling games with Harford County opponents is difficult because of the limited amount of games teams may play, but we should still try and should be noted by whoever the new athletic director is. Students from public schools and JC love facing off and starting another chapter in the constant feud between public and private schools. I would like to thank the athletic department for setting up this memorable game and hope they continue the rivalry.

The games don’t just end with basketball. Having at least one match up against inter-county rivals for every season and as many sports as possible would boost school spirit tremendously and have a game that everyone in the county would mark as a must-see game.

Just imagine a Friday night game during Homecoming week against Bel Air High School or C. MIlton Wright on the new turf fields. That sounds like a dream come true and music to my ears.