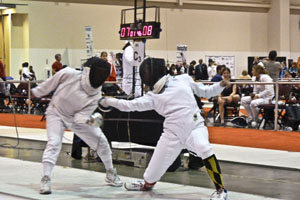 In the matter of a few seconds, a fencing bout is won.  Every step, every move, and every decision counts.

While fencing to get into the top 16, Jones was up against a girl with nine years of experience to Jones’s three, a B rating to Jones’s E with A being the highest possible rating, and two coaches helping her to Jones’s zero.

“Her coaches were telling her exactly what to do and how to beat me, warning her about some of my special moves. When I started getting up on points, she was able to change how she fenced, and then she started matching the score up, so I had to keep switching what I was doing,” Jones said.

In the final 15 seconds, the advantages of Jones’s opponent proved too much, and Jones lost.  At the end of the event, Jones was placed seventeenth out of 200 other girls, despite the odds.

“I was an underdog in that tournament.  A lot of people from rival clubs were expecting me to do very poorly.  I had other coaches come up to me and say I wasn’t going to do well.  It was very humbling, because it reminds you that you’re not the best fencer, whether you think you are or not,” Jones said.

In addition to her own bouts, Jones coached Lipford during one of her matches.  Even though Lipford was losing at first, she was able to come back before the end of the match.  “The second part of the bout, [Jones] started giving me this great advice, and I guess it just finally clicked.  It started to get where I was getting more points, and I brought the score up from an eight-point deficit,” Lipford said.

In the male competition, Mews had his own challenges to overcome.  He was up against a six-foot-tall competitor using a special grip on his fencing epee to elongate it over four inches.  Though Mews fought his hardest, he wasn’t able to beat his opponent.

“I was really disappointed, because I travelled all the way to Nevada and I didn’t perform that well,” Mews said.

Mews, Jones, and Lipford  plan to keep training almost every day after school until the next big competition, which is the Junior Olympic qualifiers in December.

“I wasn’t there so much to win as I was to get experience and to just learn about fencing.  It was such an honor to be there and see all these fantastic fencers, who work so hard every day.  It’s such an honor to be in a position where there are people who do this as a living and to be able to be among them and learn from them,” Lipford said.

Brianna Glase is a Managing Editor for The Patriot and jcpatriot.com