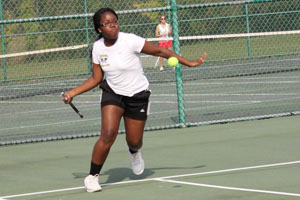 After months of practicing four days a week for at least an hour and a half, the women’s tennis season  finished in a week-long marathon of championship matches.  JC came out in third place in the B conference.

Championships began on Oct. 17, and varsity players had matches every day to determine where JC ranked.  There were three rounds: the elimination round, the semifinals, and the finals.

Weerasooriya was pleased with her and Love’s performance. “We went to championships last year too, but we were much better this year.  Even though we lost in the second round, in the first round we beat the #2 ranked team.  We had lost to them twice before, but we still beat them in the championship round.  They were the hardest team we’d ever played,” she said.

Head tennis coach Ed Miller was also pleased with his team’s performance, especially Weerasooriya and Love’s.  “The closest [match] was Amanda and Imani.  I was satisfied with everyone, and I think [co tennis coach] Tory Allinson would agree,” Miller said.

In the season overall, the girls tennis team’s record was 4-2. Their losses were to the Friends School of Baltimore and Glenelg Country School.

Miller didn’t think the losses came as a surprise.  “It was pretty one-sided.  They were definitely a notch above us.  JC needs a lot more to reach that level,” he said.

“I feel like we could’ve done better, but we tried our best,” Baker said.  Next year, Baker is hoping for herself and the team to do better, aiming for the #1 singles spot.

Miller is enthusiastic about next year’s season.  “Hope pulls through for the future.  We have a few new members who are now learning the fundamentals from me and visiting tennis professional John White,” Miller said.

Overall, Miller was happy with the team’s performance this season.  “The 2011 girl’s tennis season was, as expected, quite satisfactory,” Miller said.

Brianna Glase is Managing Editor for The Patriot and jcpatriot.com.