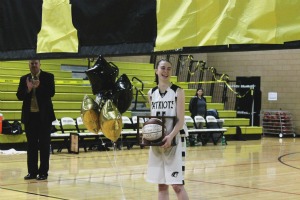 There were 36.7 seconds left in the game as JC went head to head with Fallston.  The crowd sat anxiously on the edges of their seats watching JC’s last attempt to tie the game.  Within seconds, the ball was thrown into the air and a three-point shot by senior Emily Soller tied the game, resulting in a four minute overtime.  The game was filled with intensity as JC took over on a 13-0 run against Fallston, a long-time rival.

On Jan. 26, the women’s varsity basketball team faced the Fallston Cougars, who in the past have provided JC with close games.  In a tooth and nail battle, JC came out on top 59-49.

Before the game started, senior Miranda Ripken was honored for scoring 1,000 career points in women’s high school basketball amidst last week’s game against the Institute of Notre Dame. This event also earned Ripken the titles Athlete of the Week at the Arena Club and Fox 45 New’s Prep Player of the Week.

The team had decorated the gym with streamers and posters to congratulate Ripken.  She also received a basketball signed by her entire team.

“Miranda deserved the 1,000 points.  She is a wonderful teammate and amazing person,” long-time teammate and senior Maria Edwards said.

“The ceremony before the game was awesome. When the divider came down and the number 1,000 was on it, I couldn’t stop smiling. My team put a lot of work into making this ceremony something special and I am really grateful to them. The ceremony is something I’ll remember for a long time,” Ripken said.

With excitement filling the gym, the game began with JC gaining first possession of the ball and Ripken scoring an easy two points.  JC didn’t let the pressure of playing against Fallston get to them during the first quarter, as they moved the ball quickly from one side of the court to the other.  They ended the first quarter leading 11-8.

Both teams faced struggles during the second quarter with the referees, which caused frustration among the players on the court. The number of fouls JC committed began to creep up on them, but the team made up for it by scoring points.  Junior Mackenzie Reese was the leading scorer of the night and took charge during both the first and second halves.  JC ended the first half in the lead 27-22.

Throughout the rest of the game, JC and Fallston kept it close.  With the clock running out in the fourth quarter, JC committed seven fouls giving Fallston the advantage, allowing them to shoot foul shots every time a Patriot fouled.  With two minutes left in the game, Fallston pulled ahead by three points.  JC had one last play that could tie the game.

Soller made the three-point shot in the final play of regulation sending the crowd into an uproar of excitement and the teams into overtime.

“Even though we let the lead slip away, we didn’t give up and came out and played well in overtime,” Edwards said.

JC shut out Fallston in overtime keeping the ball consistently on the offensive side of the court.  The tension in the game eased up for JC as Fallston let up on defensive end, giving JC easy foul shots and helping them win the game 59-46, the first win against Fallston women’s basketball in the past four years.

“It felt amazing to win against Fallston. Even though it was out of conference, the game was a big one since we’ve had close loses to them in the past,” Ripken said.

Megan Battaglia is a Multimedia Editor for The Patriot and jcpatriot.org.