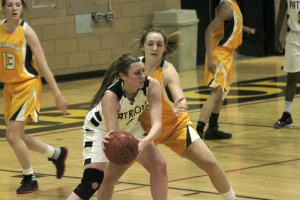 Despite its original postponement, the senior night game for the women’s varsity basketball team against The Bryn Mawr School still promoted energy.

JC created a quick lead when seniors Maria Edwards and Emily Soller both scored early on, bringing the score to 4-0.  Bryn Mawr responded just as quickly, however, and the score changed to 4-3.  Soller and senior Talia Kahoe scored five more points, but Bryn Mawr matched that with four points of their own, keeping the score close at 9-7.

An impressive three-pointer made by Bryn Mawr and a layup from JC tied the two opponents for the end of the first quarter at 10-10.  Heading into the second quarter, Bryn Mawr took the lead but was stopped by senior Miranda Ripken’s two-pointer.  JC began to get serious in the second quarter, when Ripken, Soller, and sophomore Maya Johnson hit several shots, which brought JC up to a safe lead of 23-12.

Edwards, who is known more for her assists, demonstrated a new side to her skills as she sank a three-pointer for JC.  Sophomore Rita Watson brought the score to 28-17 for the end of the second quarter.

During halftime, the underclassmen on the team presented special poems written in honor of each senior on the team.

Each senior and their parents were called to the center of the court.  Then they were presented with a special team jersey with their number on it and a bouquet of flowers.

After the festive presentation for the seniors, the team came back energized and ready to go for the last half of the game.

Bryn Mawr sank yet another three-pointer and Ripken shot a layup.  However, Ripken was elbowed and the game was paused for her to catch her breath.  This did not seem discourage Ripken or JC however, as JC came back with several baskets against Bryn Mawr.  At the end of quarter three, JC was dominating with a score of 48-27.

Bryn Mawr scored a few shots here and there, but JC finished the fourth quarter with several strong plays.  The last quarter also became memorable, as the seniors all were sent in to play for the last few minutes of the game.  Each senior attempted a shot, and Kahoe made a two-point layup near the end of the game, which sealed the final score 56-33, JC.

“It was a good game.  It was sad because it was our [the seniors’] last game at home, but the juniors did a good job with the speeches and poems and it was really nice,” Edwards said.

“I think [the game] went really well. I’ll always remember it . . . The game, the ceremony, and how much work was put into it by Coach and the other girls. I couldn’t ask for a better team,” Kahoe said.

“I am incredibly proud of my team. I loved the ceremony was that organized for us, and playing with the girls that I’ve been going to school with for four years was a very momentous occasion for me,” Ripken said.

“It was a very cool moment to play with my fellow seniors. The game went really well and I couldn’t be more proud. The ceremony was an amazing experience and I can’t thank the juniors enough,” senior Amanda Graziano said.

“I couldn’t stop smiling. It was such a great night. Our team played amazing. I couldn’t ask for better teammates or better coaches,” Soller said.

Grace Kim is the Online Chief for The Patriot and jcpatriot.com.