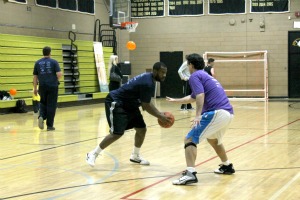 Gerry Gray was a teacher and the first football coach at JC.  The football stadium is named after him, as he was a part of JC for 30 years.  In honor of Gerry Gray, the scholarship is given to student athletes.

“This year, there were 124 players in the tournament and it will probably raise about $5,000,” Director of Annual Giving and Constituent Relations Laura Lang said.

Alumni Justin Polun, class of ’90, is the chairman of the tournament and organizes the event every year.

“[The tournament] honors a JC legend in Gerry Gray in keeping his memory alive. The proceeds from the tournament go to his scholarship fund to help two student athletes at JC. Finally, the tournament itself is a good alumni event for people to participate in. Each year people look forward to this tournament to come back and play and have fun. Literally, guys come in from Florida, Oklahoma, Pennsylvania, Delaware, Virgina, Baltimore City, just about all over the place to come and play in this event. It is very family friendly and a nice community event,” Polun said.

Megan Battaglia is a Multimedia Editor for The Patriot and jcpatriot.com.